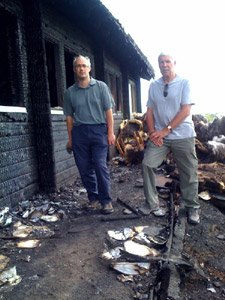 An appeal has been launched to raise funds for rebuilding after a fire destroyed the reception area and hide at Hauxley Nature Reserve. Wardens said they were “devastated” on seeing the destruction of the reception hide after the fire.

The fire brigade attended the scene after midnight on Sunday 27th June, but were unable to save the wooden eco building which housed the office, toilets, kitchen facilities and provided a large space with magnificent views for birdwatchers.

Duncan Hutt, Head of Land Management for Northumberland Wildlife Trust who own the site told The Ambler: “It isn’t just the fact we lost the building, it’’s all the volunteers’ effort and the history that’’s gone. You can’t replace the time and committment.”

Warden Brian King agreed. “We had 15,000 visitors last year. The reception hide is also used by community groups such as the Northumberland Astronomical Society. Childrens’ groups come up and use the building.” In recent years, visitors have come from Norway, Denmark, Pakistan, Australia and America.

Plans to enhance the ruined reception hide will have to be rethought, revealed Steve Scoffin, Druridge Bay Development Manager. Plans had included developing the building with increased interpretation and the creation of a training room for ‘Coal and Coast’ activities in the northern end of Druridge Bay.

Northumberland Wildlife Trust has now launched an appeal to raise money, which together with any insurance claim and funding through the ‘Coal and Coast’ and other projects, will enable a new building to be designed and built.

NWT thanks Cramlington building company Mears which has stepped in to help them following the fire. Mears has cleared the site of the burned-out building and converted and fitted out a disused former brick toilet block on the reserve into a temporary visitor centre.

The firm’s efforts will save the Trust around £8,000, and the company’s suppliers, City Electrical Factors and builders’ merchants Travis Perkins in Blyth have donated materials for free, while JBT Waste cleared the debris from the site.