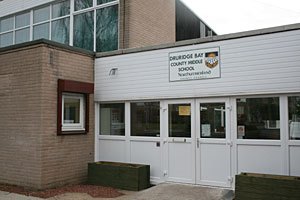 Executive Head of the Coquet Federation Christine Graham told The Ambler,  “A decision has been made by the Governors to consult with the County Council on a proposal to amalgamate the two Middle Schools.”

She explained, “We understand that people will be worried about this proposal. It is a particularly hard time in this area at the moment, but if the decision doesn’t result in amalgamation then we will be facing difficult times. Druridge Bay Middle School currently has 164 students but is large enough to accommodate up to 400 pupils.

“Although it might seem amazing to have a big building with very few children, it’s not. The children rattle around in the building; it’s more than half empty. There has been a falling birth rate nationally and although there has been new housing in the Hadston area, that hasn’t given us the extra number of children.”

Maintenance costs are high, with grass cutting costing £10,000 per year for the Druridge Bay site alone.

“It’s purely a financial decision based on making the best possible choices for the young people in our schools. We are conscious of how parents and pupils will feel, but there is no easy solution. There is just not enough money. If we amalgamate our two Middle School sites we can make considerable savings – anticipated to be somewhere in the region of £100,000- £200,000 in savings. The current deficit will only get worse if we remain with the three sites.

This is now a Northumberland County Council proposal for consultation and a final decision is not likely until March – April next year. Mrs Graham insists they will work with whatever decision is made. “Whatever the decision, our aim is to focus on providing a fantastic education for our children. We want education in Amble and the surrounding area to be excellent in as short a time as possible and we are really passionate about providing that.”