Another British title for Tamsin 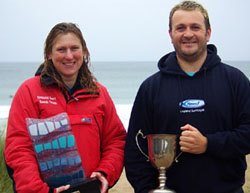 Having qualified for the England team with great results, Tamsin and husband Dan (pictured here) joined them in preparation for the Home Internationals,  a team event between the UK’s four nations, and to enter as individuals in the British Championships.

The British Championships saw Tamsin achieve first places in all her heats for the High Performance category, losing out to second place in the final.  In the International Class event she took the title of British Champion for the second year running.

Dan was hoping to improve on his 3rd place from last year but after several tough rounds went out in the semi finals to the eventual winner of the men’s competition.