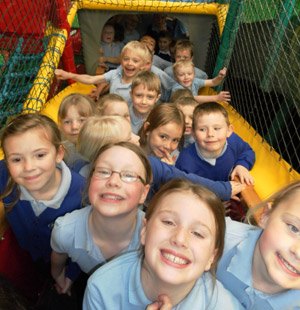 On Friday 15 April 2011 the Key Stage 1 and 2 pupils from Amble Links First School successfully completed a mammoth climb of 8848 metres, the same height as Mount Everest.

The sponsored event involved the children making a total of nearly 2000 ascents of the climbing frame at Castlemania which is 4.5metres in height!  Each child made at least 32 ascents before sliding back to begin again.

Despite the high winds, freezing temperatures and thin air, all of the children returned to school safe but exhausted.

Meanwhile the Foundation Stage Pupils took part in a ‘Walk to Everest’ on the school field involving the same number of paces as it is miles to get to Everest from Amble.  A great day was had by all!