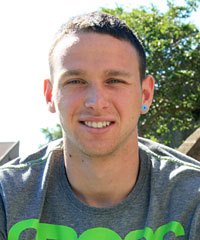 Local footballer Phil Airey is hoping for his big break this summer as he waits to hear if he is called up to the Toon’s first team. Phil has been at Newcastle United’s Academy since the age of 10 and this past season he had the honour of turning out for the first team.

Currently living in Acklington, Phil attended Coquet High School where at the age of 11 he played a season for Amble. It was here that he was spotted by a Newcastle scout and taken into development before progressing onto the Academy where he has continued to train ever since.

In January of this year Phil was chosen to be on the bench for the FA Cup game away to Stevenage. With 12 minutes to go he was sent onto the pitch making his debut for the first team.

“It was a great experience, such an adrenaline rush as soon as I walked on the pitch. I was so excited” said Phil. “The manager said that I’d done well.”

Phil is hoping to join the squad travelling to America for the pre-season and then become more of a first-team regular in the new season. It may be that he goes out on loan, which Phil says will give him great experience for his push for the first-team. It’s also an important season as it’s the last year of his current contract.

Phil has been a Newcastle United supporter his entire life and has a tattoo declaring his allegiance on his right arm. His family are also supporters especially his mother and sister, who attend every game they can. Phil cites Alan Shearer as his hero; “Shearer was a natural scorer but also a leader off the ball, he wanted to win every game.”

Three years ago it looked like it may have all been over for Phil when he fractured his back kicking the ball but after eight weeks in a cast he says he was fit and raring to go.

Since then he has gone on to win the Golden Boot in the Premier Reserve League North with 11 goals and was also player of the tournament in the FOCA Cup in May 2010, scoring two goals in the final which Newcastle won 3-2 to retain the cup.