Bruce’s Business: This is Spartaaa! 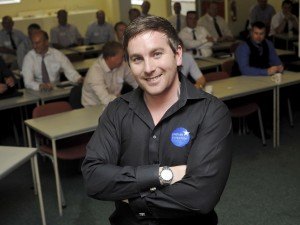 Wowsas! Have you seen the guns on the lads at the circuit training sessions? It’s like the back up cast of ‘300’ have pitched up ready for war! THIS IS SPARTAAA! Brad is running like Linford, ‘Tee’ Taylor is banging out press ups like Van Dam, Neza is digging in to the tank every single session, Sean Kelly is putting the graft in like a true captain should and as for Mad Baz, well no one knows what he is actually doing but he’s getting a canny sweat on and there’s nee one madder than Mad Baz!

Without a doubt the circuit sessions have been an absolute success, really good training that all the lads can have a pop at.

We are currently trying to get ladies only sessions up and running. My natural enthusiasm got the better of me when I said it was for all the community, there would be some seriously strange shaped women who could do the class with the lads. In order to give ladies the same opportunity to train, we should have a ladies only class running in the very near future so watch this space for further details.

I have been clocking the miles recently with a few new contracts that we are trying to finalise. Preston, Stafford, Oldham, Nottingham are some of the places I have been to, been putting in more miles than Elen McArthur but hopefully they should pay off!

Pleased to say that ‘her indoors’ is up and running again with her new nail business ‘LA Nails’(some of you will get the twist on LA!). Now I don’t know anything about nails (I am a hairy 300 warrior remember!) but from some women who I have been talking to, Kelly’s nails are right up there with the best of them and they are so pleased she is back in business.
It’s great to have helped her set herself up as self employed, looking at what services she is going to offer, getting her marketing correct, as Kelly now feels that she has got something to do for herself, something that she can aim for and achieve, as well as being a cracking mam!

The puzzle was quite simple by the way, it all depends on your perception of what is in front of you. Most people will have tried to divide, or add, or do some mathematical equation. But by adding one line, I0I0II CAN EQUAL 1050.
Simply put the line at the top of the second I. You now have I0T011, and we know that on all watches, ten to eleven can also be called 1050! Cheeeesy!

Well that’s all for me now, I am off to prepare for my business pitch at Preston tomorrow. Got to practise talking, it’s something that doesn’t come naturally to me……. Geordie Shore, WHEY NER!