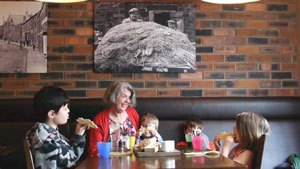 A film about the Northumbrian towns and villages that hosted the Olympic Flame relay in June, features an Amble fishing family and a comedy duo from Warkworth.

Filmmakers Bev Fox and Ian Maclaughlin of Magic If worked with groups from each of the thirteen towns and villages along the route of the Olympic Torch relay. Northern Flame was commissioned by Northumberland County Council and it opened at the Berwick Film Festival.

Amble’s section of the film features Vivienne Dalgliesh and her grandchildren, as she reminisces about her father and his life as a fisherman in Amble. 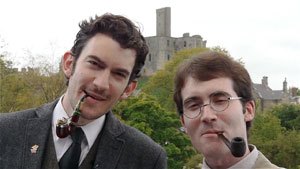 Sir Hilary Harrison-Nairn and Gerald Honk Esq. aka Whither And Why, ponder what it is to be a Northumbrian. (c) Magic If 2012

Warkworth Castle provides the historical backdrop for Daniel Gurney and Daniel Watkins in philosophical guise as ‘Whither and Why’, hilariously considering what it is to be a Northumbrian. Citing famous Northumbrian philosophers ‘Wor Socrates’ and ‘Wor Plato’, they also sing a rousing rendition of the Northumbrian anthem.

Vivienne describes what it was like to take part in the film.

Magic If approached Anna at Amble Development Trust about subjects for a film, to celebrate the passage of the Olympic flame through the county.

Being a local, the daughter of a fisherman and a volunteer on the Ambler, with my grandchildren volunteers in the Artograffi gang, Anna asked if I would be willing to help with the project and I agreed. I had no idea what I was letting myself in for.

We had a meeting to find an angle of approach, because Bev Fox and Ian McLaughlin of Magic If Media wanted to have a different slant in each location. 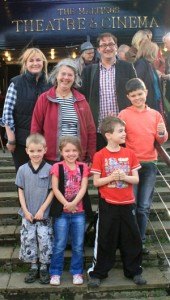 Filmmakers Bev Fox and Ian Maclaughlin with Vivienne Dalgliesh and her grandchildren Nathaniel, Gabby, Ben and Will.

During the discussion about things of local interest and fish, I happened to mention that there was a lovely picture of my dad, Norman Henderson, on the wall in Zecca and so the idea was born.

They asked for photographs, old or new, and items of interest to give them some background and I included an article I had written, for a local studies group back in 1991. The article was about my growing up in Amble and the commentary from this forms the dialogue to our section of the film.
The film was premiered in The Maltings at Berwick on Sunday 23rd September and with some trepidation I invited all my family along to the showing.

‘Well done’ to Bev and Ian for fitting everything into the time scale despite the rain, which only features at the very end of the film. In Amble, we scheduled many meetings but had to cancel because it was always raining, so the first meeting was only sound recording, and I discovered that if you stick a microphone in front of me I just become tongue tied. (I now have a new respect for sports personalities who can give instant interviews even when English is not their first language.)

Later, as time was pressing, we organised a ‘make or break’ meeting when we were going to film whatever the weather but we were lucky enough to see the sun and all the elements of the story were present on the quayside, so the gods must have been smiling on us that day.

I got very emotional at the screening, but I don’t think I need to hide away as a result of my role.
Vivienne Dalgliesh