Whither And Why: Happy Honkday 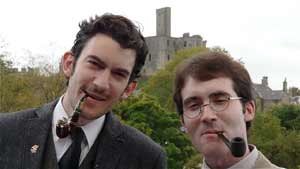 From the desk of Gerald Honk, Esq.

The anniversary of one’s birth is invariably a splendid occasion; at least, I always thought so. Lillian and I would often take a picnic to the riverside, feed the ducks and read the paper, that sort of business. However, this year I was persuaded to try something a little different, and I learned that it is most unwise to allow one’s friends to plan a celebratory occasion on your behalf, particularly if one’s friend is the Senecan superman and Ovidian oligarch, Sir Hilary Harrison-Nairn.

I do not wish to recall the particulars. I hand over to the journal of my friend’s faithful and meticulous housekeeper, Mrs Clutterbutt, who kindly proferred her words to spare me the troubles of recollection:

Oh Lordy, my master Mr. Sir Hilary has planned an unmentionable do for ‘is good friend Mr Honk. I says ‘unmentionable’ on account that Mr. Honk is not the type for dallying with peoples of the firearms persuasion. Neither is my master for that matter but that’s more due to a judicial order than because of personal abhorrence. I’ve mentioned in passing on numerous occasions that I was of a mind that Mr. Honk might prefer something more genteel like a best of ten at Backgammon or perhaps a billiards contest down in the local pub, followed by a cigar or two.

Nothing; my master is one of that breed o’ men that sits by his mind once it’s made up…and then stands by it too, just for good measure. Trying to convince him otherwain over a decision is like trying to park in Dial Place at high summer…impossible.

I has ordered the guns and the folks to carry ‘em for the day’s play coming up. The aforementioned legal order also prevents my master from keeping such noisome weaponry on a permanent basis so he has spent the past few days taking pot shots at squirrels with a quite ingenious homemade device, featuring a ladies hair dryer, two toilet roll tubes and a set of ping pong balls for ammunition. That Bismarck has proved himself useful in being of a mind to return the spheres to ‘is master without complaint. It seems a happy arrangement for I sees the drool allows for a certain adherence ‘pon the target after a number of retrievals. The squirrels, however, are less than impressed.

It has dawned on me that Mr. Sir Hilary has yet to purchase Mr. Honk a suitable gift so I has wrapped an unused but by no means unhandsome, cigarette case in lieu of my master’s inaction.

Diary of Evelyn Clutterbutt 13/08/2012 20.17pm shaken, stirred and overripe. 17mg. Intravenous.
The Horror…The Horror… I had mistaken my master’s intentions for Mr. Honk’s birthday shooting party. Wholly mistaken and, almost, fatally so! Paintball was the order of the day but when Mr. Sir Hilary mentioned some “pump-action shotgun malarkey, what!?” he merely meant paintball! Oh the pain, the horror the loss of blood! They all, to a man, thought the guns an authentic breed of bruise inducing splatter-fun. Not so, within two minutes four were squealing for their mothers and two had bagged enough partridge for a month o’ lunches! As for Mr. Honk, he was out sprawled near a thicket, plumes of smoke billowing from a gaping hole in his breast pocket. Thankfully the cigarette case he’d been gifted had borne the brunt of the damage from Mr. Sir Hilary’s blunderbuss but nevertheless he was clearly shaken. We took him to the local Infirmary to be looked over. Mr. Sir Hilary was very positive about Mr. Honk’s wounds and said that “a doughty fellow like Honk is a terror to take down.” I’m not sure Mr. Honk was so reassured to hear that he had a free shot at my Master once he was out of care and could resume the game. Have made provisions for the guns to be removed forthwith and fifthwith. For now, cake and a hot bath are an imminent comfort…until tomorrow.

HH and Honk would like to express their distaste for such weaponry as firearms and their misuse.

They would also like to register their displeasure at the lack of available parking at Dial Place during high summer. Especially on a Tuesday.