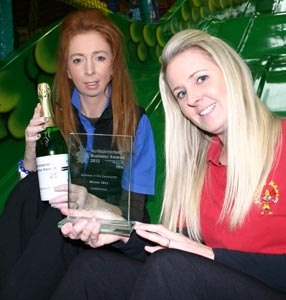 Two Amble businesses have, once again, won awards in an annual prize event celebrating the best businesses in Northumberland. Castle Mania and Azea Training Ltd were both recognised for their achievements.

Castle Mania owners Janneil Elliott and Joanne Stone (pictured left) won the Business in the Community 2012 award. As well as running a successful indoor play centre, they set up a youth club for nine to 13 year olds, which has been going for the past year and a half.

Joanne told The Ambler, “The club keeps the kids off the street and they enjoy it. We are passionate about giving something back to the local community and we also offer work placements to 14 to 16 year olds. Winning the award was quite overwhelming. We took the staff with us.” 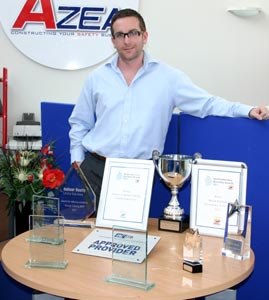 Bruce Durham pictured with some of the awards he has won

Janneil said, “I was speechless,  and I’d taken my shoes off when they announced we’d won! It was like a pat on the back for us. We never got any sort of grant or other help; we’ve done everything ourselves. It’s a recognition of what we’ve achieved.”

Azea Training Ltd won the Training Award 2012.  Owner Bruce Durham said, “In addition to our national awards and growing blue chip client list, who Azea  provide behavioural safety training programmes to, it is fantastic to also be recognised in these important regional awards. We are gaining many clients in the North East, so this serves as a testimony that we are the best in the region as well as being recognised as a leader of behavioural safety training in the UK.”