The haunting of Hauxley 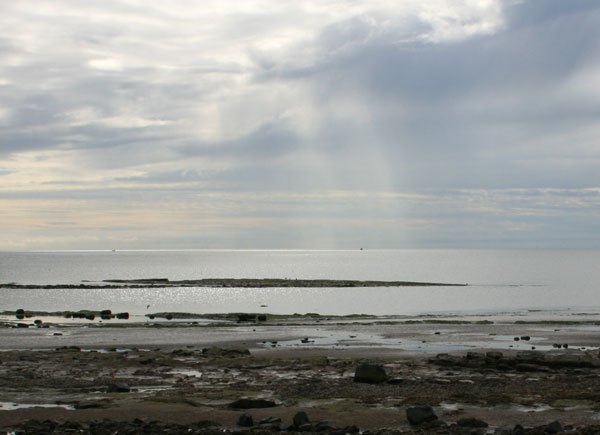 While looking at the beer pumps in the Schooner inn, an old fashioned pub in Amble, Kevin felt a gentle nudge.  Startled, he inadvertently elbowed the person before turning to face them. Their eyes locked for a moment. He couldn’t help but gaze and gaze at the woman dressed in grey standing in front of him. He was taken aback by her elegant demeanour and long dark brown hair.

“Hello!” she exclaimed. “What is the matter? You ordering a drink, or not?”

As he started to mumble she hollered  to the barman, “A pint of real ale for this gentleman!”

“How did you know what I was drinking?” Kevin enquired.

“I read your mind,” she answered, chuckling.

Her words seemed to send a charge right through him. She slid on to the nearest bar stool, and held out her hand. “My name’s Gertrude. What’s yours?”

“Kevin” he stuttered. He  was so dazed by her beauty that several minutes of conversation passed without him being able to focus on what was said, just a vague impression of grumblings about the county.  “Where are you heading for, Kevin?” she asked.

“Hauxley. Want to come along? Long ago, people buried their dead on the dunes next to the village. I have always had a fascination with the supernatural” he remarked.

Gertrude gazed thoughtfully for a moment and said, “Yes that is right- to help them begin their journey into the world of the spirits.” Gertrude then explained her ancestors were “from around here.”

Turning to the barman she asked, “How much?”

They left the pub linking arms.

A hazy sun was visible; they trudged through the rough marram grass with misty shapes of the Cheviot Hills on the horizon. They continued to journey through the dunes with the sea along side them, as they passed the East Cemetery, and trundled further on.

As the burial sites neared, some weird things happened. Gertrude’s voice slowed down in a way that Kevin thought quite sinister. The air around them felt cold.  The trees stopped swaying, not a murmur could be heard.

Gertrude began to sink in to the ground. She pulled her hand away from Kevin’s. Her skin turned an ashen colour, her hair turned white. Kevin yelled out, his mind full of images of chamber tombs covered by barrows.

Suddenly, without warning, she vanished. He felt faint and his hair began to stand on end. A throbbing pain filled his stomach.  It was truly disturbing.

To his horror, he read, chiselled on a tombstone beside him, the words, “REST IN PEACE. GERTRUDE HUBBLE. Born Stratford 1857 Died Northumberland 1901”.

3 thoughts on "The haunting of Hauxley"