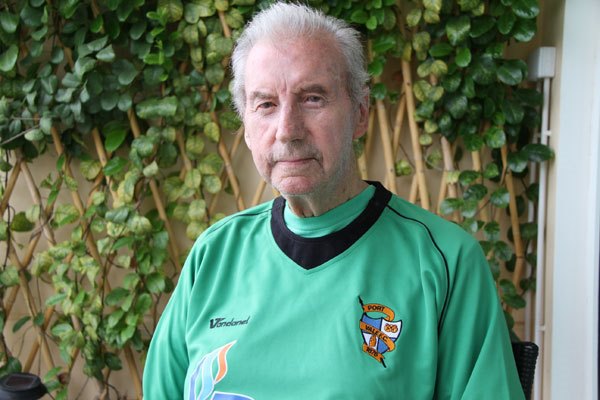 I was recently asked to comment on why goalkeepers spit on their gloves. It is simply a gesture that some goalkeepers use to “gee” themselves up. The gloves already have a sticky substance to aid the handling of the ball.

I never wore gloves and there was only one occasion as I recall when I spat on my hands. I was playing for Port Vale against Liverpool at Anfield in 1956. At one point the ball sailed up into the crowd and took ages to be returned to the pitch. In those days we only had one ball! When the ball was eventually projected back to me I distinctly remember how strongly it smelled of beer and urine. I grimaced as I spat on my hands and wiped them on my jersey. How the crowd loved that.

I was also recently asked to give an assessment of the England manager during 40s and 50s, Walter Winterbottom. It was Walter who drafted me into the 1954 England World Cup squad, at the expense of Bert Williams. Bert had kept goal in the 1950 World Cup when England lost 1 – 0 to the United States.

Unfortunately for me, team selection was the role of the FA directors who knew little or nothing about putting together the best possible team. They had the power to dictate policy. Walter wanted me as his first choice goalkeeper but the selectors, in their wisdom, said that it would be demeaning to have a 3rd division (I was playing for Port Vale at the time) goalkeeper in the World Cup! Surely this begs the question: “Why did they allow me to be selected in the first place?”

As events unfolded, England drew 4-4 with Belgium, beat Switzerland 2-0 and then lost 2-4 in the quarter-finals to the 1950 winners, Uruguay. Following the disappointment and frustration of England’s performance Walter told the players that there would be a “Wind of Change” with regard to new playing systems that would be used, including the “echelon” formation and the concept of “environmental sense”. One of the players called out, “How on earth do you expect thick buggers like us to understand that jargon?” Actually, he was even more explicit than that!

To compare Walter Winterbottom with other England managers is a bit like comparing chalk with cheese. Walter was the consummate gentleman, but also possessed a caustic wit that ensured players knew exactly when to “toe the line”. As a coach he was supreme and (please excuse the pun) in a league of his own. Sadly it was the interference of the selectors who overruled him on so many occasions which finally broke his spirit as the England manager.

The change that Walter had described did not really assert itself until 1966 when Alf Ramsey did away with wingers. This new strategy did win the World Cup – but at what price? In my opinion football lost much of its excitement.

Walter Winterbottom with his educated tongue was England’s most popular manager – the players loved and respected him.