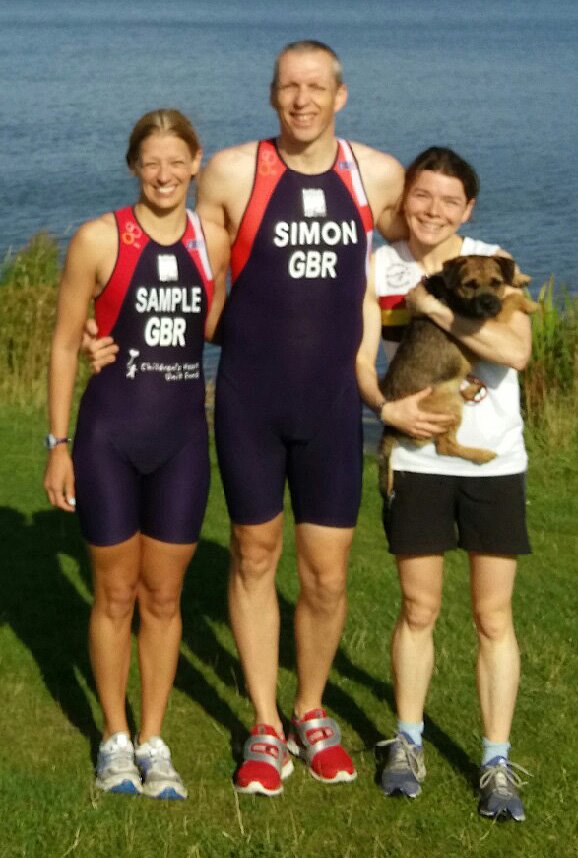 Amble triathletes Tracey Sample and husband Ian Simon have both qualified to compete for TeamGB in the World Triathlon Championships in Chicago next week, 15 -19 September.

Together with Aquathlon European Champion Jo Gascoigne-Owens, the trio have been training hard over the summer in preparation for the World Championships.

Tracey and Ian both had a challenging start to their preparations, as both had disappointing results in the British Championships, held in Cambridgeshire in May. But with a three-week gap in the race schedule,

Ian, Tracey and fellow Alnwick Tri member and Warkworth resident Steve Carragher,  travelled to Nottingham, where they had one more chance to qualify.

Qualifying for the championships

In huge swim waves of more than 200 competitors, Ian came out of the water in 9th place and had a great cycle, completing the 20km in just 29 min. He then outran the rest of the field to take first place in the Male 45-49 category just meters from the finish line.

Steve Carragher got out of the water in 7th position in the Age group, but despite a good 31min bike, he dropped to 11th place. His recent run form showed on the last leg, with a sub 18 min 5k, which brought him back up to 5th position in the Male 40-44 category.

Tracey was out of the water in 7th place, slower than normal, but dug in to ride well. With an excellent 32:11 on the bike, three places were gained, but despite running the fastest 5km at the end of a tri for 5 years and overtaking one competitor just before the finish, Tracey ended in 5th in the Female 45-49 category.

Tracey said “All these performances were good enough to qualify for Team GB at the World Sprint Distance Triathlon Championships so we will be putting in a hard summer of training to prepare”.

Jo Gascoigne-Owens (who lives in Alnmouth, but whose parents still live in Amble) is competing in the ITU Age Group Aquathlon World Championships (swim & run) in Chicago in the Female 35-39 yrs category. Ian and Tracey are competing in the same Aquathlon in the male and female 45-49 but then the following day, will both also compete in the ITU Age Group Sprint Distance Triathlon World Championships in the same categories as the Aquathlon.

The Chicago World Championship is four days long and includes Aquathlon and Triathlon world championships for elites (professionals), para-athletes, and Age Groupers (amateurs).
Jo competed in the European Aquathlon Champs in June 2015, where she became European Champion in the 35-39 category, and was also the fastest female Age Grouper overall, and would have been 3rd in the elite race.