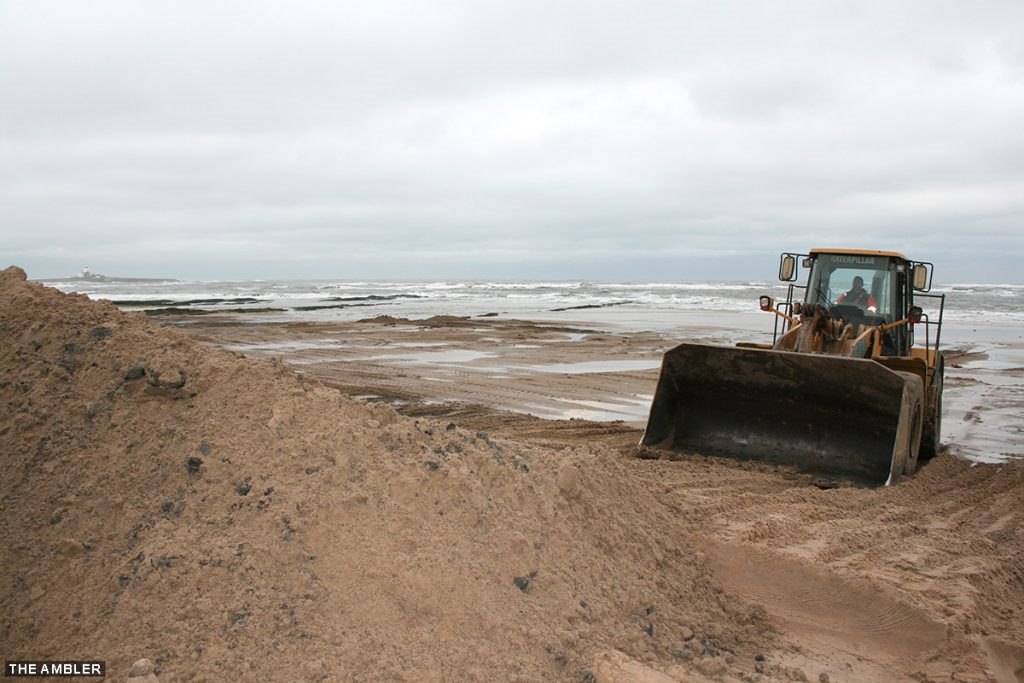 A lack of warning signage during work on Low Hauxley beach, resulted in potential danger to the public, it has been claimed, as a walker stepped into sinking sand, and, unable to free herself, had to call for help.

A digger had been moving sand on the beach to shore up the dunes at the foot of Low Hauxley chalets, after residents there were concerned at the rate of erosion.

But now criticisms have been levelled at the amount of material that was moved, which left the beach full of wet sinking sand.

Ambler reader Tamsin Green was walking on the beach near Hauxley Point when she sank up to her knees in quicksand, which had been exposed by the excavation of sand to build up the dunes in front of the bungalows.

“I walk the dog on the beach every day and it certainly wasn’t there before they started excavating,” she said. Despite being a fit, active person, she had to shout to the digger operator to dig her out with a spade.
“I think it’s dangerous. If someone had been walking there alone when no-one was around they could have been in real trouble, particularly if the tide was coming in.

“I am also concerned about the damage to the environment, as they had dug into the bedrock.”

Permission to restore the dunes had been obtained from Northumberland County Council (NCC) and Natural England, and the project was organised and paid for by the Low Hauxley chalet owners themselves.

Chalet owner Karen Burdon told the Ambler, “Because of the tidal surge a couple of weeks ago, we lost part of the dunes. We are trying to protect our properties. We spoke to Northumberland County Council and they said we don’t need any permission. We’re not moving rocks, we’re just putting the sand back. Natural England also were satisfied that it’s emergency repair work.”

But some residents were concerned at the lack of warning signs to alert the public. “I understand that the hut people feel anxious about the erosion but piling sand up and causing damage to the beach seems to be very short sighted. There was no warning, no signs,” said one resident.

Hauxley Parish Council said they knew nothing about the work.

A letter from Natural England, seen by The Ambler, states: “Natural England understands the emergency repair work to the cliff at Low Hauxley, located within Northumberland Shore SSSI is required as a result of the coastal floods from 12 – 15 January 2017 which resulted in severe erosion of the cliff face to the front of your property.” 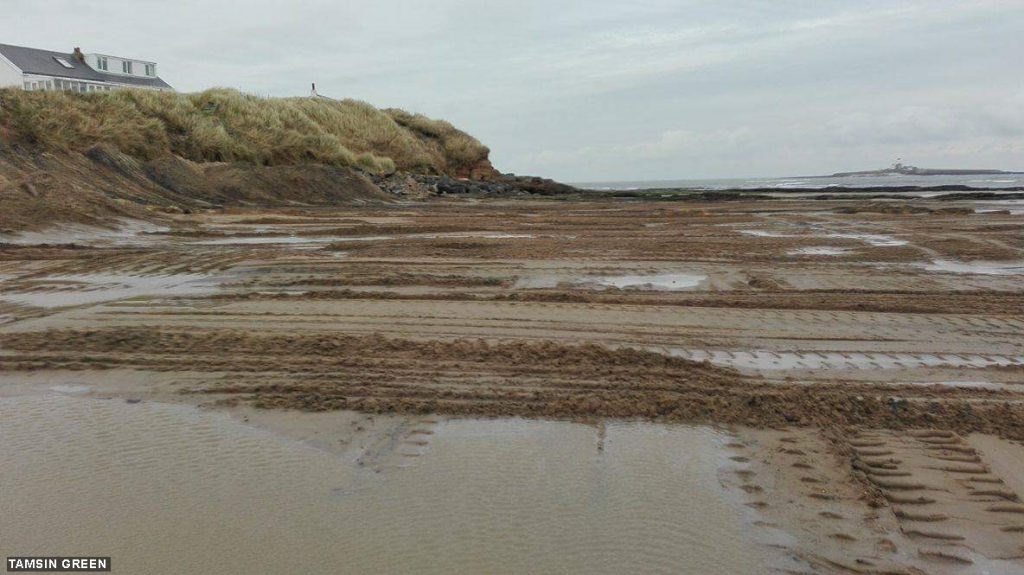 Walker Tamsin Green sank up to her knees in quicksand, and had to call to the digger operator for help

Permission was granted for the work, which was considered minor, and would only last one day.

The letter continues: “Natural England consents the proposals, if undertaken in strict accordance with the details submitted in the email and confirmed on the phone, is not likely to damage the interest features for which the site has been notified.”

Karen Burdon said “We’ve also got permission to re-establish the dune grasses and to put up fencing until it gets established. And [the workmen are] repairing the ramp, while they’re there. ”

She was sure the beach would be back to normal within the day. “By the time the tide has gone back out, you won’t know it’s even happened,” she said.

However on seeing photographs of the digger working on the beach, a spokesperson from Natural England said: “From reviewing the photographs it is evident the works are major and outside the consent granted to the land owner.”

A site visit was to be arranged.

A spokesperson for NCC said: “After further investigation yesterday afternoon, I did find some small area that may cause some concerns with regards to works.

“At the base of the dunes the reinstated sand which has been heaped up to create a barrier is still unstable in place, however this is very localised sinking in to a maximum depth of 200 mm (8 inches).

“As a result we have placed several warning notice in the immediate vicinity, for the public to be aware and to keep clear of the area until further notice.”