Multi-million upgrade for A1 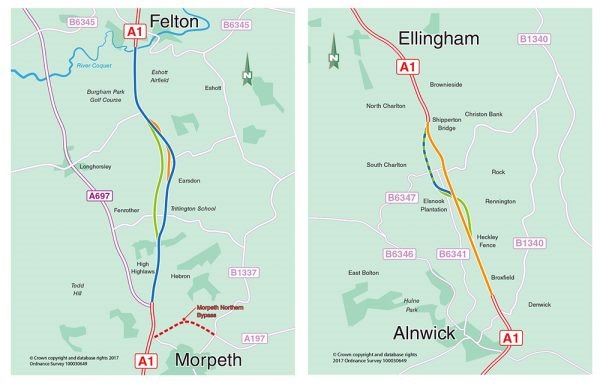 The favoured options: green on the Morpeth to Felton route, orange on the Alnwick to Ellingham stretch

Plans for a multi-million pound upgrade that includes dualling a 13-mile stretch of the A1 in Northumberland have moved to the next stage.

Following a six-week consultation last year, three options were presented to residents and local stakeholders for plans to widen the A1 between Morpeth and Felton, and one option to widen the A1 between Alnwick and Ellingham.
Highways England is planning to upgrade the sections of single carriageway in Northumberland, creating a dual carriageway on the entire stretch of the route between Newcastle and Ellingham.

These improvements will provide additional capacity, and improve journey times and safety while supporting economic growth in the region.

A total of 587 responses were received and the majority of people (41%) preferred the green option for the Morpeth to Felton section and nearly half of respondents agreed with the orange option for the Alnwick to Ellingham section (49%). Highways England project manager Nanette Hoyle said: “We recognise the importance of this route and are delighted to announce the two options we are taking forward are the ones which the majority of people wanted in last year’s consultation.

“Over the last few months we have worked hard to identify the best possible options by working through the feedback from the events, along with safety, economic and environmental analysis and we are excited to share our plans with local stakeholders, businesses and the community.

“Work now continues, adding detail to the design for each of the dualling options and on planning how we will deliver them in a way that keeps traffic moving.

“I would like to take this opportunity to thank everyone for taking part. There will be further opportunities to have your say as the schemes develop.”

The green option between Morpeth and Felton includes building a new carriageway to the west of the existing road between Priest’s Bridge and Burgham Park. This will improve safety along the route and will also have benefits during construction in terms of worker safety and efficiency. The existing A1 will act as a local road once the scheme has been completed.

The orange route between Alnwick and Ellingham involves upgrading the existing road to dual carriageway, widening either the east or west of the current road depending on the local features that need to be considered. This option also includes improvements at the South Charlton junction.

Further work to refine the ideas will now take place and a further consultation with more design details included will take place next year. Construction work on the £290 million scheme could start by March 2020. Money for widening the A1 is being provided as part of the Government’s £15bn Road Investment Strategy.