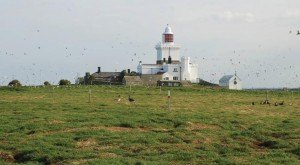 2010 has been a fantastic season for the birds. The staff numbers have been increased on Coquet to help look after and guard the birds. On the mainland Jane Johnson has taken up the post of Coquet Wildlife Project officer, based out of the Northumberland Seabird centre, on Amble Quayside.

Sandwich Terns
After a shaky start the ‘Snads’, as they are affectionately known have had a good year. The original plot filled early on with 655 nests which was bolstered by a second wave of 414 leaving us with the grand total of 1069, an increase of 22% on last years number! 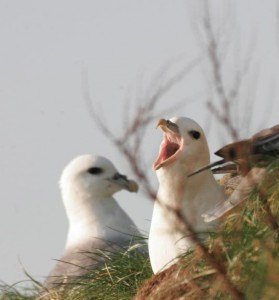 Fulmar
The fulmars are counted by sight at low tide. The count this year has come in at 71 pairs, an increase of 20 on last year. this is good news as birds only return to the colony if food is plentiful.

Kittiwake
The kittiwake colony continues to grow on the east of the island, and is now 183 pairs strong. The kittiwakes only began breeding on Coquet in the early 1990s, but since then there seems to be no stopping them.

Black Headed Gull (BHG)
TheBHG census is the trickiest and covers the largest amount of birds. The nests are spread over a large area and are counted individually by a team of wardens and volunteers. The count reached 3316 this year. 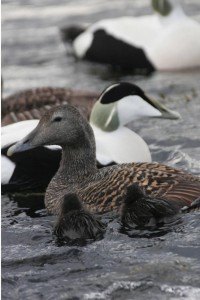 Eider Ducks
The eider census has taken place in its two parts ensuring all late breeders are counted. The combined total of 326 is impressive, a 25% increase on last year’s number. The crèches of ducklings in the estuary have been the highest since accurate counts were started almost 20 years ago.

Rosies and Puffins!
The roseate terns have a longer breeding season than the other terns – this year a staggering 80 breeding pairs was counted. Once again Coquet is the sole UK colony of roseate terns. As for the puffins; due to their complex burrows, they are only counted every 5 years and those visible changed from day to day but counts at the end of July just before they left the island, showed they were doing well.

This population news is all well and good, but it only a small part of the monitoring the RSPB carries out on Coquet.