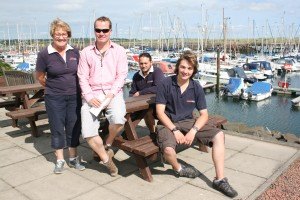 The flags have been flying at Amble Marina this summer for visiting boats from Holland, Belgium, France, Germany and a number of Round Britain yachts from the south coast. They have shopped in Amble, watched the World Cup at Amble’s Harbour Inn, visited Warkworth and Alnwick Castles and spent time in Barter Books.

But readers may not know that the Marina is home to many boats from the local area. Karen Brunton told The Ambler, “We have around 250 boats here at the Marina. More than half are from the Amble area, some are from Tyneside, about a quarter from further afield, places like Harrogate, Leicester, Nottingham and Derby, or north, Berwick, Dunbar. People keep their boats here and travel, because they love it.”

Managing Director Karl Brunton said “We’ve worked tirelessly to promote the Marina and we work in partnership with other organisations such as Hartlepool Marina, Royal Quays and Eyemouth. We promote it to sailing and yachting clubs. Coquet Yacht Club’s right on our doorstep, we can’t exist without each other.. But at the end of the day, it’s not the Marina people want to visit, it’s Amble and the surrounding area.

All the Marina staff are local people and they take pride in directing their visitors to amenities in the Friendliest Port. “We deliberately don’t have a coffee shop, we don’t sell papers. We send people into Amble if they want food, bread, meat etc. Many of our visitors go to the Sunday market, Jaspers etc.” said Karen. “We send them to Lawrences, Ken’s Autos or Young’s. Not everyone sleeps on their boats, so some stay at the caravan park or hotels and B&Bs.”

For trips further afield, visitors need advice on how to get around. Possibly they have bicycles, but often they have no transport and have to rely on public transport. Karl says they have noticed how much the Dutch love travelling by bus. “They don’t have double decker buses in Holland – they love it because they can see over the hedges etc.”

The Dutch cruising association came here as part of our PR drive” said Karen, “Seven boats came in, mostly middle aged couples. We put on a BBQ at Coquet Yacht Club for them. I got all the meat at Amble butchers and ice cream from Morwick.” She laughed, “Our rendition of Tulips From Amsterdam had to be heard to be believed because no-one knew all the words! It was during the World Cup – I think it was the semi finals that evening. The landlord at the Harbour Inn was brilliant, he set aside the big screen TV, put on some cheese and biscuits. They said he was so friendly and that night everyone in the pub supported the Dutch team. It was a great atmosphere.”

Phil Derry for CYC said, “It was a real pleasure for Coquet Yacht Club to entertain the Dutch Sailing “fleet”. The last time there were this many Dutch ships in the UK is when they invaded us in the 1600s! “
Dutch yachting journalist and single handed sailor Anje Valk said of the Dutch visitors: “They were very pleased indeed with [their] hospitable reception in Amble, they did not stop talking about how much they enjoyed that.” See her email to The Ambler below.

“It’s like a big family here” said Karen “There are huge friendships between people. There is more feeling for the Marina than when it first started. That must be because otherwise we wouldn’t have so many Amble people here. People are very welcome to come in and see us, sit on the picnic tables and watch the boats.”

There are security gates for access to the pontoons, but the rest of the Marina is accessible by the public.

Karl Brunton said, “It benefits us all, especially the local shops, and helps maintains jobs, without any outside support or grant funding. It shows it can be done. We will continue to promote Amble at home and overseas.” 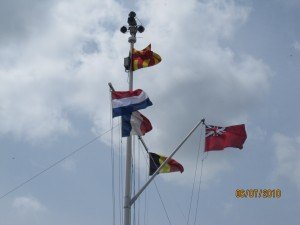 A personal view
You asked me why Dutch yachts enjoy coming to Amble and the area.

Amble Marina is a very hospitable marina with all the facilities that yachtsmen need after a long crossing. The owners and staff have a welcoming and personal approach.

And otherwise than for instance in North Shields and Blyth, the Marina is just a few steps away from the town, with good shops to stock up with fresh food, fresly caught fish available, a nice restaurant, a library etc. We find Amble a friendly little town and the people kind and helpful.

After a crossing, or when the weather is not ideal for sailing, it is nice to stay a few days and do something else than bobbing about on waves.

Amble offers good beach walking and a nice river walk to Warkworth and beyond. And there is good public transport to places of interest in the area, like Alnwick or Newcastle.

Amble is on a wonderful coastline that offers a cruising area that we Dutch – from a low, flat and crowded country — can only dream of: unspoilt, quiet, interesting history, stunning nature and birdlife, good cruising, walking etc. It is away from the crowds and it still offers a sense of adventure.

Amble Marina is an ideal stop for yachts on their way to the North (Orkney, the West Coast). It is the last proper marina until Edinburgh or Peterhead.

But also for those who have only three weeks holiday the area is a very attractive destination, with beautiful anchorages (the Farne Islands, Holy Island, Newton) at the doorstep. The first time I called into Amble was in 1989 and I have been back many times since.

Probably Karen has told you that I write for a Dutch yachting magazine and that I am also the author of a Dutch yachtsmen's pilot about the East Coast.

In recent years, Dutch yachts have learnt to know Amble better. I have tried to contribute to that and I shall continue in doing so.

Anje Valk
The Netherlands via email