Mildred moves in as Rosemary retires 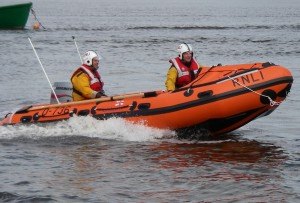 Amble has a new RNLI inshore lifeboat, thanks to a generous legacy from a long-time supporter of the charity.

The £31,000 D class lifeboat is called ‘Mildred Holcroft’ in memory of the late wife of Yorkshireman John Holcroft, whose legacy has funded the lifesaving vessel. She will operate alongside Amble’s all weather lifeboat, The Four Boys, and replaces the station’s former D class, Rosemary Palmer, which has reached the end of her operational life.

The Rosemary Palmer was however in action very recently when her crew went to the aid of a dinghy that had capsized off Alnmouth beach. They rescued someone struggling in the water. He was handed over to paramedics on shore.

In a spate of recent launches due to the warm weather increasing the number of incidents, the crew of Rosemary Palmer again sprang into action as their emergency pagers were triggered by HM Coastguard requesting a launch to go to the aid of another dinghy that had capsized off Alnmouth beach.

Somebody was again in the water just east of Alnmouth Golf club. The crew rescued the person from the capsized dinghy which was a 10ft ‘Laser’ type piloted by a local man from Alnham. Both the skipper and the vessel were taken back to the safety of the shore. The casualty was then handed over to Boulmer Coastguard who carried out further assessment and discussions with the skipper.

Somebody on a body board just to the east of Warkworth Golf Club was the next callout. Reports received indicated that the person in the water was unable to make it back to the shore and was struggling as a result. Upon arrival at the scene, the ILB crew rescued the person from the water and after assessment for injury, the ILB returned the casualty to the safety of the shore where he was handed over to waiting paramedics.

The paramedics then treated the man for the effects of being in cold water whilst the ILB returned to Amble Lifeboat station and was re-fuelled and made ready for service again by her volunteer crew of three.

ILB Helmsman Paul Stewart said “Fortunately, the sea conditions on today’s shout which we would describe as ‘slight’ and the low wind of just Force 2 made for a simple and straightforward recovery that was not complicated by any serious injury.”

In August Mildred was getting into her stride. She was kept busy as the holiday season had more people putting to sea and sometimes getting into trouble.

On August 2nd a fishing vessel had broken down 3 miles north of Amble and without power. it was towed back to the harbour.

Two days later the lifeboats were called out when red flares off Hauxley were spotted. nothing was found but Chinese lanterns were spotted, which were probably mistaken for flares by the public.

Another two callouts were successfully concluded.