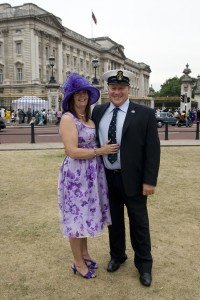 Amble RNLI Coxswain John Wingfield was surprised when he received an invitation from the Lord Chamberlain’s office to attend a garden party at Buckingham Palace. He and his wife Kim had been nominated by the RNLI in recognition of their long and devoted service over many years.

John has been a volunteer crew member for 30 years, during which he has risen through the ranks to become a Coxswain of the lifeboat with full responsibility for search and rescue operations in charge of Amble’s all-weather Mersey class lifeboat ‘The Four Boys’.

Kim is is Chairperson of Amble Lifeboat Fundraisers (ALF) having been raising funds for the RNLI for 30 years.

To access the garden they had to walk through the Palace. John said, “The interior was stunning, we saw all the portraits and the staircase, we could have spent the day just looking at everything inside.

“I couldn’t believe the size of the garden, you could nearly have fitted Amble into it.

“It was a fantastic day; Kim and I were just in awe of everything.”

The security was very tight, but discreet. The personal guards wore top hats and tails and carried umbrellas, which they used to prevent anyone getting too close.

No cameras or mobile phones were allowed inside. They had to produce two forms of identification to gain admittance. There were finger sandwiches and barley water. No alcohol! They stayed overnight in a hotel near the Palace.

John is due to retire in two years on reaching 55, but has the option of carrying on until reaching 60 if he keeps fit.