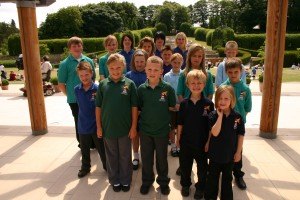 Alnwick Gardens played host to a Sea Shanty music gig for young singers on July 8th. Amble First, Warkworth, Broomhill, Druridge Bay, Links, Acklington, even Berwick came all the way down! The choir from Coquet High also came along to give a helping hand.

Most of the children attending were in years one and two. In total, there was a staggering 189 students all from the Coquet Partnership filling the Pavilion at the Gardens. We spoke to the main organisers Daniel Grey, Kai Hardy and Sammi Hamilton about the planning of the event which included choosing the venue and much more!

Kai said “This is all part of our Music GCSE Unit 1 course work, so its been really fun planning it.” Sammi added “Its been very exciting, I’m sure we have all learnt brand new skills that will come in handy in the future”.

We asked Daniel the reasons for picking such a nice venue – apart from the obvious! He said “We chose this as our venue because it looks great, it’s been nice to come here, and the singing sounds really good because we had our rehearsals in there this morning, over all its all been great, better than any of us expected!”

The tops that everybody wore all had the same logo on them; a Lighthouse shining musical notes out of it, Kai Hardy designed it and had it transferred onto all of the tops. The theme of all of the songs being sang at the event, were Sea shanties, which tied in with the logo on the tops!

We managed to catch Coquet High’s Music teacher, Mrs Lord: “Everybody’s worked so hard, I’m just glad its all going to plan.. so far” she said laughing.
All of the schools taking part will receive a CD with all of the songs that they sang on the day!