Daniel Ferries Interview
Daniel Ferries and Mariska Simpson entered a competition on the 22nd July called ‘Life without Prejudice’. Mariska did a photo of her sister Elske, whilst Daniel painted a girl named Laura holding a gun, standing in front of a wall.

There were over 2,000 entries but only 100 finalists were chosen. Luckily Dan and Mariska were chosen and were asked to go to the awards ceremony.

We asked Dan where he went and what he thought of the place.
“It was the first time I’ve been to London. It was nothing like I thought it would be. I didn’t see much because as soon as I got off the train I was put on a bus and taken to the South Bank where the ceremony was held.” Sadly Daniel or Mariska didn’t win the competition. To see their paintings and others, type Young Brits into Google and click I’m Feeling Lucky.
Written By: Alysha Wilson 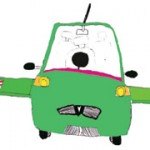 Flying Car Takes To The Skies
An amazing flying car has been built in America. It’s called the Terrafugia Transition and looks like a normal car until you press a button and the wings pop out the sides. If you happen to be stuck in traffic then the car can take to the skies instead, cruising at 115mph. But if you want to turn up to school in one then you’ll have to save your pocket money as one of these amazing cars costs a whopping £130,000! This latest model can fly about 500 miles and you can fill it up with fuel at a normal petrol pump. It takes about 30 seconds to extend the wings, but you do need about 500 metres of clear road to take off. Unfortunately, because of the worldwide money problems, the company behind the flying car have had to stop making them at the moment but they hope to be making them ready for you to buy soon.
Written By: Andrew Mounsey

Pooh, the confused bird
Is it a seagull? Is it a cat?
No, its Pooh, the seagull that thinks he is a cat.
He is a family pet to the Grimwood family now in their hometown of Shoreham-by-sea. He arrived in the families fireplace as a baby, and since then he has joined the families cats and lived in there basket, eaten their food and basically taken on a cats life. The family put little pooh on the top of the chimney so he could fly away but he fell down and got all covered in soot. June and Steve Grimwood calmly fed and nursed him. Then one day he flew away…He still returns for six months to get his share of the cat food, that’s 3 meals a day for him. He feeds with the cats ‘Mitzi, Gus and Henry’. Pooh and his partner nest on the Grimwood families roof. June Grimwood jokes, ‘At least he knows where a good B&B near the seaside is.’

Name changes are so complicated
Amble is not the only place to chanfge their schools’ name.. Thomas Percy Middle School and St John’s First School are changing their names to St Paul’s

I asked Ewan Runciman, Luke Taylor and William Hayter –Dalgliesh what they thought of the new changes.

Here is the difference; Bahrain’s average temperature in the summer is 45 degrees Celsius and in England it’s 22 degrees. Bahrain has so much dust, people with dust allergies are rarely allowed into the country.

I lived in Bahrain for 10 years, because my Dad used to live there. 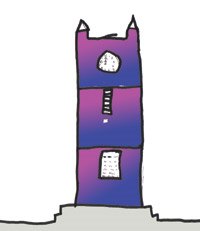 My favourite part of Bahrain was the heat but that also is one of the worst parts. The good side is that if you go into the sea you don’t have to worry about the cold, but then again the heat makes the Jelly Fish come extremely close and sting people a lot!

Another good part of the heat is that you don’t need to worry about it raining when you’re playing football, but in Bahrain sadly when you play football even the professionals have to have a break every 15 minutes until full time.

Now I will I tell you why I moved to Amble, I just loved Amble when I first came to look at the houses. But then I thought to myself, I am so bored. So I ran out and found something I haven’t seen for ages, the sea. I am looking forward to making new friends, getting back into a football team and being by the sea.

Raoul Moat
Raoul Moat was a man on a mission, a mission to kill every police officer he came across. He started on Saturday 5th July, a couple of days after he was released from prison. Then came the start of his deadly rampage, for that day he shot and injured his ex-girlfriend Samantha, and killed her boyfriend, Chris Brown, and then  blinded David Rathband, a Police Officer who was just sitting in his patrol car watching the late morning traffic.

He then said he would keep on killing police until he was dead. It is thought that he said this because his ex-girlfriend, Samantha, told him that she was dating a policeman thinking that this would protect her.

The police fear that these were the words that sent him on a deadly rampage towards the police. Samantha was seriously injured, the Policeman lost his sight and Samantha’s boyfriend was killed.

Finally though when the 6th day had dawned Britain’s most  wanted man was finally stopped. He was found by the River Coquet in Rothbury holding a sawn-off shotgun to his head.
Finally after a gruelling 6 hour stand-off, early on Saturday 11th at 01:15 Raoul Moat’s life finally came to an end.

Even though he is dead, the seven terrifying days in which Raoul Moat left his mark will be remembered for a very long time. This has put Rothbury on the map, but sadly for all the wrong reasons.

My thought towards this is that he didn’t deserve to die; he deserved to be punished for his crimes. To die in a dirty old prison cell. There shouldn’t be tributes to him on Facebook or flowers laid at the riverbank in Rothbury.

I think the police kept him alive for those six grizzling hours because they knew that if they brought him in they would be like knights in shining armour. Not that I mean any bad things towards the police. I mean if it wasn’t for them we could still be all scared stiff. He left a letter threatening that he would start killing the public because he thought they were helping the police and yet even after that threat people still feel sad about him.

Young Rangers
Are you passionate about the environment?
Do you like the outdoors?
Are you aged between 13 and 20?
If your answers are yes, then the Area Of Outstanding Natural Beauty (AONB) are running a Young Rangers group, this includes; hedge planting, stile construction, pond maintenance and bird reserve maintenance. If you’re interested and would like to be involved then contact; Shirley Wright at the Seahouses Youth Project on 01665 721960 or visit; www.northumberlandcoastaonb.org

Pufflings, wildlife and being outdoors
Jane Johnson is Coquet Wildlife Protection Officer for the RSPB. 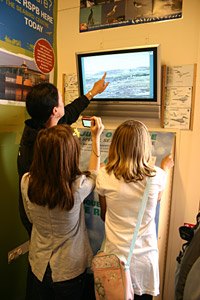 She protects the birds, and with the special CCTV at the Seabird Centre (located on the quay) she can monitor the birds and make sure that no harm comes to them and Coquet Island. Anna, Amber, Andrew and I paid a visit to the centre.

When we got there everyone was very nice and talkative. Then we were shown were the CCTV camera was and how sometimes birds go right up close that you could see every detail on the beak. It was amazing. I even found a puffling (a baby Puffin). It was quite a size and had no colour on its beak but it flapped its wings and was really funny.

The way you moved the CCTV camera was with a little joystick. The only thing was to follow the birds you had to nudge the joystick a little bit and unfortunately when I tried to follow a puffin as it flew away. I stayed on it for about a second then lost it. But how close you got to the birds was amazing. Sadly though we didn’t spot any seals. Mind you Amber and I were the first ones to spot a Puffling.

The funniest thing was that when I found the Puffling we were just about to leave, I focused the camera back on the hole it came out of and it  was just standing there. Then Jane went to get her camera and the bird disappeared down the hole.

We talked to Jane, and she told us about her job which is trying to encourage more young and old people to come to the countryside.

She asked what sort of things we liked to do outside and how we could encourage young people to take more interest in the outdoors.

If you know anyone who likes country walks, bird watching or making things then get them down to the Seabird Centre (located on the quayside).