On Sunday 16th December the Mayor of Amble, Cllr Ian Hinson presented a cheque for £460 to Steve Isaacs (Chairman of Amble lifeboat Fundraisers) with the RNLI mascot Stormy Stan looking on.

The cheque was made up of a grant of £350 from Amble Town Council and £110 from the proceeds of a raffle held at the Mayors recent annual reception which the Mayor generously donated to the RNLI in Amble. On receiving the cheque Steve Isaacs thanked the Mayor and expressed the appreciation of both the fundraisers and Amble crew for the generous support given by the Town Council and the Mayor. As a Charity the RNLI relies upon support such as this to fund the training, kit and boats for their crews. 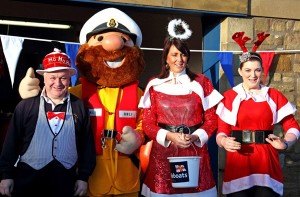 Pictured here are a few of the Amble Lifeboat Fundraisers in festive outfits, along with the RNLI mascot, Stormy Stan, at the recent Christmas Coffee Morning held at the lifeboat station. The event was the final fundraiser for 2012 and was once again very well supported raising a total of £382.06.