Through the Lens 2013 Exhibition of photos 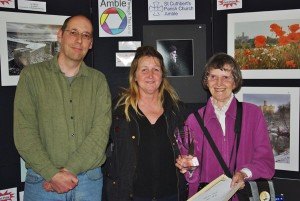 There were more entries than ever for the competition this year, 228 altogether, and all photos were exhibited in the Parish Hall over the early May bank holiday. Almost 300 visitors came through the door, and most took part in the People’s Choice competition.

Photographs of views, Castles and Coast of Northumberland, outnumbered the Portraits of People by almost three to one. In both categories were some fine photographs. The whole made for a great exhibition.

Cream teas or tea and biscuits, were provided and served by members of St. Cuthbert’s Church. A raffle was held with great prizes including a £20 voucher donated by Amble Butchers, and donations from church members.

Cash prizes (from £10 to £50) were awarded to winners, thanks to Co-op Funeralcare, Harbour Fish Bar, Nickalls of Bridge Street and to Spurreli for their ice cream vouchers which were awarded to each young person under 18 who won a prize. The People’s Prize again excited interest and the winner was awarded with a glass trophy and £25, both donated by Amble Photographic Group, partners with St. Cuthbert’s Church in Through the Lens. Due to popular demand, second and third prizes were also awarded for the People’s Choice.

The judges were both professional photographers: Mark Sunderland, from Knaresborough, a landscape photographer, judged the coast and castles photographs, and Kat Timmins of Shilbottle, who specialises in portraits and weddings,  judged the portraits.  Commentaries on the winning photos, indicating their winning points, had been provided and were posted next to the photos.