Withered and Weird: A Hallowe’en special 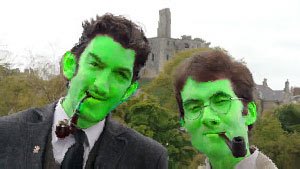 There are some things in life that occur without warning, reason nor sense. Things that no matter how much you hope to prepare for, will undoubtedly prove to be too overwhelming and result in complete capitulation and the sudden and deafening termination of all peace. One of these things is my friend, the heebiest jeebie and prince of pagans, Sir Hilary Harrison-Nairn.

I was just scratching off the previous day from our bespoke beeswax calendar when it dawned on me that the most terrifying date the year has to offer was fast approaching: invite day for the Harrison-Nairn Hallowe’en party!

As my wife Lillian was about to issue a tut after glancing at the calendar over my shoulder, the door bell rang and I made for the portal expecting to welcome a tall be-tweeded shape over the threshold. I was to be disappointed. In place of HH’s lolloping frame was instead that of an officer of the law, a look of knowing concern spread across his red face.

Gesturing for me to go with him, I donned my raincoat and hat. It turned out that a Wight or Ghast of some kind had been reported plaguing the cemetery and village shop late at night. Witnesses claimed the figure spoke in tongues and gesticulated wildly.

An idea of what we were to expect was already forming in my brain.

We approached the churchyard with Caution (a silly name for a police dog but she didn’t seem to mind). The rain bucketed in increasingly heavy streaks of near horizontal splatter.

Sudden whispered chatterings seemed to come from all around us. We swept the church yard with the torches, beams of light briefly illuminating the gravestones. And then we saw it. A long white shape disappearing around a set of tall memorials. We threw Caution to the wind and gave chase, the dog landing somewhere near the last known position of our quarry. Rounding the corner, we almost leapt from our skins as the torch light was broken by long thin fingers and arms, and a rapidly approaching billowing mass clattered into us.

Clad all in white and looking quite drawn was the babbling form of none other than my good friend Sir Hilary Harrison-Nairn. I reached and pulled a set of earphones from his head and instructed the officer to bring my friend to my house.

After a hot bath and a stirring cocoa I sat down with my friend and the constable.

“So you are learning Hungarian in your sleep, and because your wife has hidden your sweet stash, the combination of these situations has caused you to sleep shop. Is that it?”

“Sort of, old chap. Any lack of confectionery makes me loopy at the best of times, but the effect is certainly exacerbated by the language tape. One was getting told off for yabbering away during the day, so I did it at night…unfortunately it seems I’m getting quite good and my subconscious has begun seeking the locations the tape describes.”

“And when we found you, what were you saying?”

“‘Show me the way to the church please, I need to buy some cheese’’”

“And at three times the speed!” I interjected. “You’d sped it up to learn quicker, hadn’t you, old thing? That’s why you were running about so wildly.”
“Hungarian in a week, next is Galapogan Dutch!”

There was a pause.

“I’ll leave him with you.” The officer rose and bid farewell.

“I think we need to find another way for you to learn languages, HH.”

-HH and Honk would like to wish you all a vile and terrifying Hallowe’en.
– The Hungarian of what Nairn said is “mutasd meg az utat a templom kérem. Meg kell venni egy kis sajtot.”