From the swell of the North Sea outside Amble harbour, to the shark-infested waters of internet copyright, two local surfers have been catapulted into a media storm.

Matty Stanley from Amble, and Andy Flounders from Morpeth talked to The Ambler, and described how, out surfing off the coast of Amble in early August, they suddenly discovered a new surf buddy, in the shape of a young seal pup, who insisted on joining them, clambering aboard their surfboards and riding the waves alongside the two men.

“When [the seal] first started to to scramble on the board, it was unbelievable” said Andy. “It was going from board to board, it was the cutest thing.”

Matty agreed: “Andy said to me: “Have you got your camera on? I pressed the button straight away, and then it came over to my board and started hopping on it. It went on for about an hour, surfing with us all the time, catching its own waves, all it was trying to do was get on the board.” 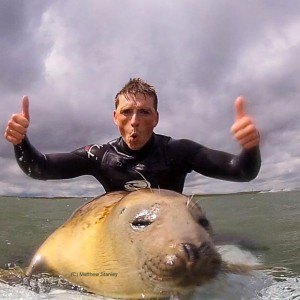 “On Sunday I edited the video, then on Monday morning I got up and I thought, ‘this is going to be pretty popular,  let’s YouTube it’ – and after  that things went mental!”

The video not only made a splash, it went viral, being picked up by media all over the world. Matty and Andy took phone calls and Facebook messages for days and nights, as their surfing seal story played out to millions of people on TV, in print and of course on social media.

In all of this, someone pirated their video, pretending that it was theirs and Andy and Matty had to defend their copyright, signing up to a media agency so they could keep control of their footage.

“People talk about sharks in the water,” said Andy. “But there’s more sharks on land.”

The Friendliest Port has attracted a friendly little surfing seal, but it’s all been a whirlwind for the two amiable surfers.

So far there have been about 2.5 million views of their video, with celebrities including Lady Gaga and Richard Branson posting messages about the surfing seal.

Said Andy, “It’s been a wonderful experience. When all this dies down, when it’s tomorrow’s chip shop paper, we’ll have that experience still.” 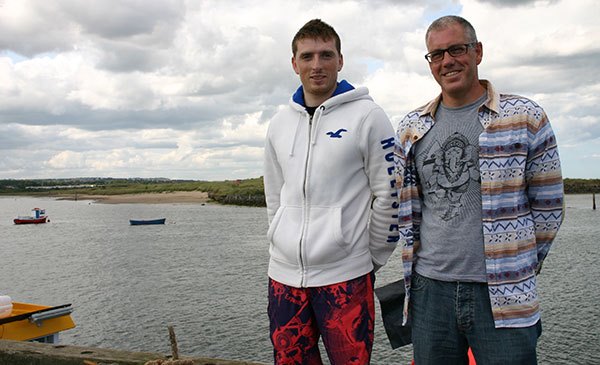