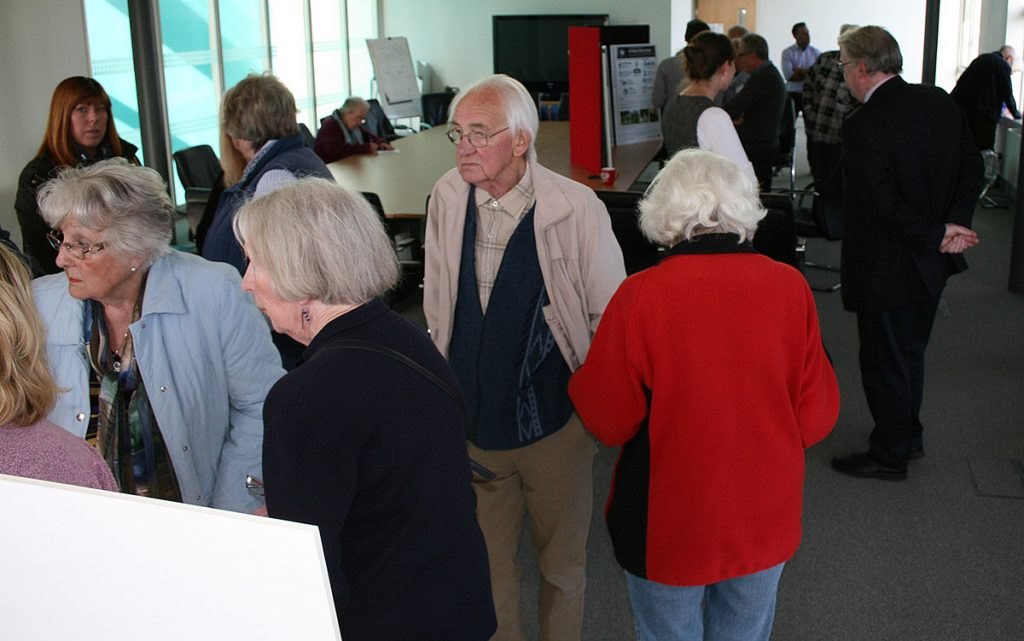 The public consultation drew a large crowd throughout the day

Plans for a possible 500 house development in Amble drew mixed views at a public consultation event, and prompted a resident of Acklington Road to set up a petition.

At the consultation event, held at the beginning of October, members of the public were asked to view the outline plans, and give their views on what type of housing they might like to see. This included how many homes they would like to see built at the site, and whether or not they were in favour of the provision of affordable housing.

Housebuilder Paul Hindhaugh told The Ambler: “We’re not looking at a high density site like the Persimmon development. We want a good mix of open space. I’m a local builder and I can see Amble has changed dramatically in the last 20 years. We’re considering aspects such as: can Amble sustain these houses? Amble wants a supermarket, more access to dentists, doctors etc. so a development of this kind may facilitate that improvement.”

It is envisaged that there will be 55 new full-time jobs created as a result. 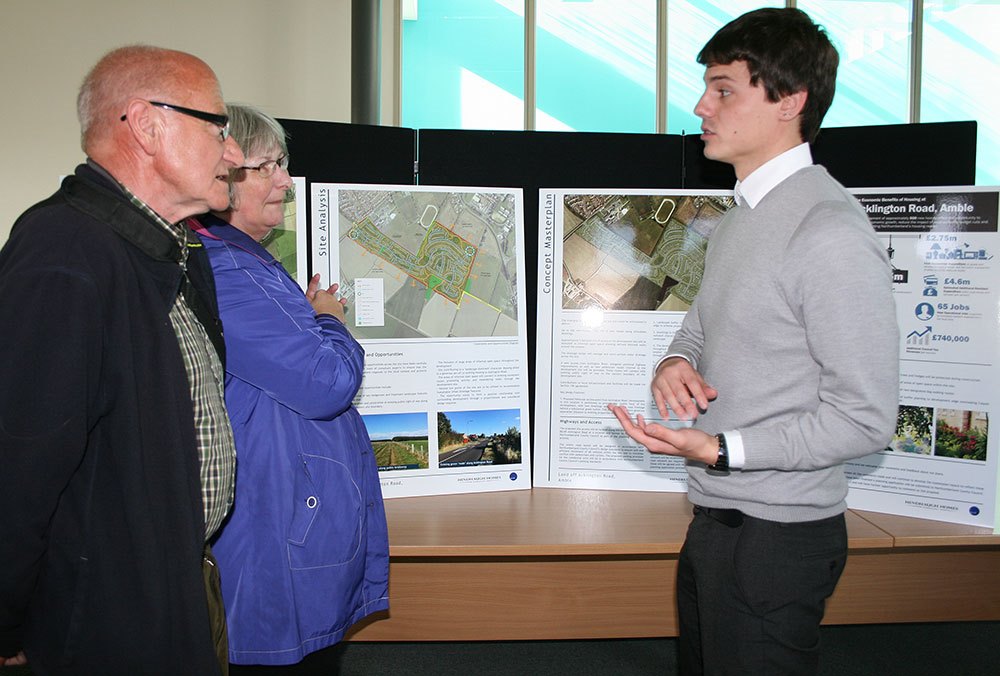 Concerned residents
Some visitors were skeptical of the new development, most people citing an increased strain on local resources.

“We live at Castle View and we can’t get out onto Acklington Road on a weekend. We don’t need it. We can’t get into the doctors or dentists, we haven’t got a supermarket.” said one visitor.

Mr and Mrs Bond have recently moved to Amble from Thirsk. “We have just bought one of the new Persimmon houses and we found we can’t get a dentist in Amble. We’re not against the idea of this [development], but it has to be able to bring prosperity to the area, which we can’t see happening yet with the Persimmon development.”

But some visitors were optimistic with the plans, and one expressed exasperation with some of the comments they heard being discussed.

“I’ve no idea how anything gets built in Amble, with the amount of negative comments,” he said. “Amble needs investment and if that’s the start, then I’m happy. If this goes ahead then it might just attract Asda or the like.”

The Ambler spoke to NCC strategic planner David English, about how such numbers are decided. David explained that the government’s policy is to build more houses, and NCC must develop a strategic plan to adhere to that.

“The National Planning Framework says we have to boost the supply of homes. Our Core Strategy is the document which outlines NCC’s plans for growth. We are planning to deliver 24,000 houses across Northumberland between 2011 and 2031,” he said.

Regarding access to medical provision, David explained that planners examine the ratio of patients per doctor/nurse. The surgeries in Amble have a lower number of patient to GP ratio than others in Northumberland, and the national average.

“It’s an issue of recruiting and appointing GPs. The NHS Clinical Commissioning group are responsible for recruiting. The planning system can’t do anything about that.” 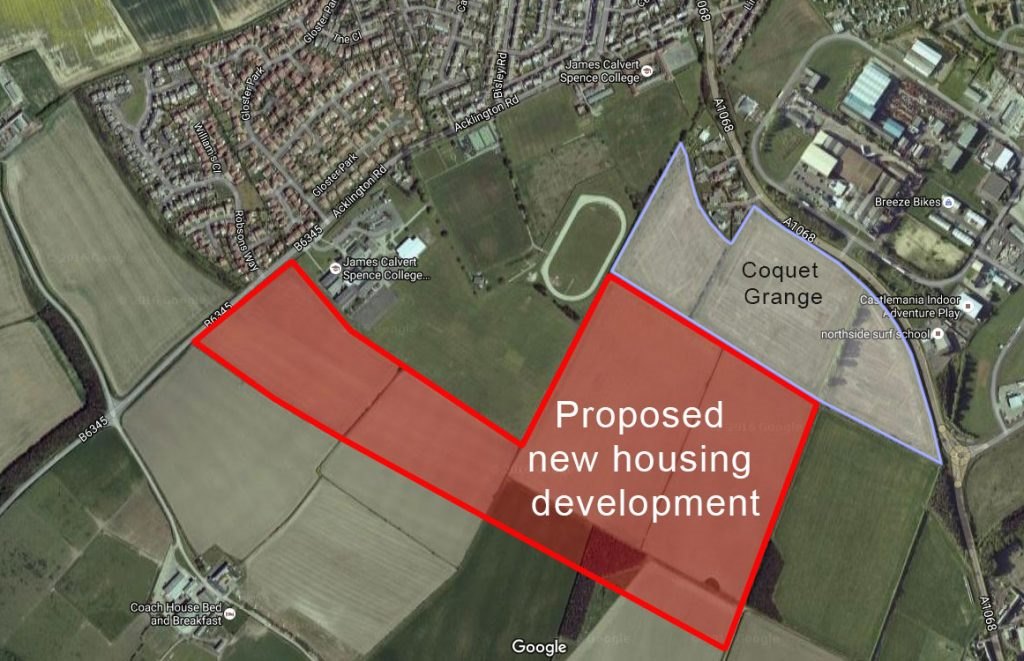 Access to the new homes would be from Acklington Rd

Petition launched
Michael Walters, who lives on Acklington Road, was so concerned that he sent a petition to Northumberland County Council’s highways department with almost 100 signatures in support of resiting the entrance into the estate. He believes there should be more public debate on the plan.

He told us: “When I spoke to people they were very angry. Woodbine Street and Acklington Road are very congested now, especially at school time with inconsiderate parking. Residents’ on- street parking between Bisley Road and Albert Street makes the road a lot narrower, with vehicles driving along the footpath outside our property. There are four Arriva buses every hour during the day and school contract buses.”

“A number of roads leading into Amble are constrained, meaning improvements may be required to support further development; including Percy Drive to the south; Gloster Hill to the north west; and Acklington Road to the south west. There are capacity issues associated with a number of junctions within the town centre.”
NCC Strategic Land Review 2016

Current NHS funding is insufficient for any increase in staffing

Development in and around Amble is something we see as generally positive for the local economy and this has recently been accompanied by significant housing expansion.

Sadly general practice is under considerable pressure at present and the huge demand from patients across the area is incredibly difficult to match with current capacity.

As doctors who feel passionately about our ability to provide high quality patient care, we are keen to increase the number of GPs, nurses and associated clinical staff.

We understand the significant potential for preventative healthcare in general practice but this is only possible with more clinical staff.
The current funding from NHS England is insufficient to make these required changes.

Our area has some of the highest levels of chronic disease (e.g. obesity, hypertension and diabetes) in the North of England.

In addition we have a growing number of patients over 80 years old, many of these have multiple medical problems.

Inevitably, an increase in the local population will result in added pressure on primary care services and we would hope that this will be recognised by NHS England and the appropriate support provided.
Coquet Medical Group spokesperson

Schools like JCSC which are small in comparison to others welcome suitable development in the catchment communities ideally supported by communities too. We monitored approval of applications for housing in Hadston, Widdrington and latest interest in Amble. As the Government funds schools per pupil extra students means extra resources for schools to further develop their offer.

As we continue to merge and improve as a federation we welcome any new additions to our student cohort in any year group. Recently we have had an influx and student numbers can always fluctuate regardless of development. The important point for us is we have capacity.
Our schools, especially the High School, were built for a time where many more students were educated in Amble. More students basically means more teachers and resources for all.
Scott Dickinson, Chair of Governors JCSC

The First Schools are both near capacity and in some year groups are full. There would have to be detailed discussions with Education. Numbers are an inexact science but planning for school places is a responsibility of Northumberland County Council. I made my concerns known to the developers.
Robert Arckless, Head of Children’s Services NCC

By Anna Williams and Norma Hinson