Good young citizens are the pride of our community 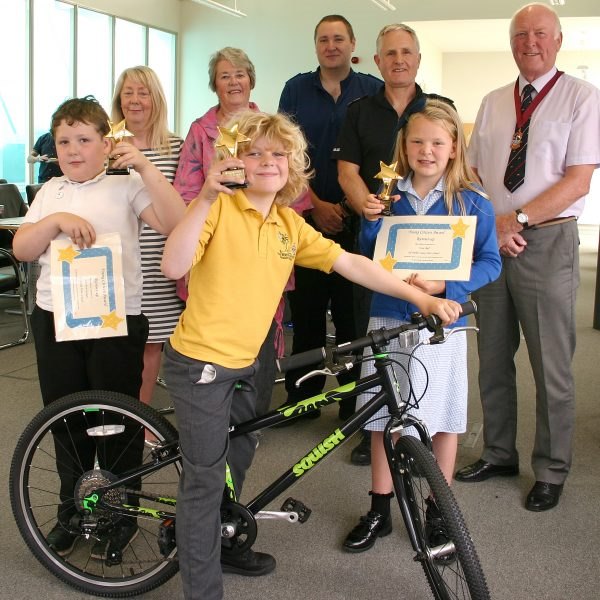 Three young citizens were nominated for this annual award for outstanding behaviour and attitude.

Joe Denny from Warkworth First School, Harrison Gough from Amble First School and Evie Bell from Amble Links School were all shortlisted for the award given by Alnwick Neighbourhood Police Team and supported by local businesses.

Joe was nominated for his outstanding attitude to life. He adopted the motto “Never Give Up”, a mantra which has helped him meet some of the challenges of his ADHD, particularly when he finds many situations overwhelming. He has tackled personal fears and is caring and supportive of his younger brothers.  When he heard a local charity had lost a significant amount of funding, he wanted to help. So far, Joe has raised more than £2000 for the charity, running a mile a day throughout the month of June.

He said “I’m happy. I was surprised when they read my name out.”

Being presented with a bike was a particular treat, as he only learned to ride during the Easter holidays. Now he has a bike, he says he is keen to try a triathlon.

Evie Bell was nominated by Amble Links School, for being conscientious and hardworking at school. She’s a highly effective Junior Play Leader, helping to organise equipment and games, she’s a school librarian, and at home, often helps her grandfather who has Parkinson’s Disease. Evie also helps around the house, walks her dog and sets a good example to others.

Harrison Gough was nominated by Amble First School, for being up for most challenges. He is very good at maths and helps his peers, even making a series of short maths videos. He is a great organiser, a kind and considerate group leader, and happily manned a book stall at the summer fair. Harrison is a huge help at school, and encourages other children even when he finds tasks challenging. At home, he helps his disabled mum, and although he dislikes PE and sport, sets himself goals to keep fit and healthy.

This year’s good citizens award was organised by Alnwick Neighbourhood Police Team and Amble Development Trust. Now in its seventh year, the award recognises outstanding and exemplary behaviour by local children, both at school, at home, and in the community. Each winner received a certificate and trophy, and a goody bag filled with treats and vouchers, all donated by local businesses. A cake was donated by Amble’s Farm Bakery. The overall winner received a bike and helmet donated by Spurreli.