Looking at the night sky – February and March

> moon phases for February and March. Image by Adrian Jannetta

The Moon
The full moon on March 9 is informally known as a Supermoon. That’s the name given to a full moon occurring when the moon is at its closest point to Earth in its orbit. It will look a little larger and brighter than a ‘normal’ full moon. The full moon on February 10 is almost a supermoon too.
This is the best time of year to look for earthshine on the crescent moon. The night-side of the moon is faintly illuminated by light reflected from Earth when it is a crescent. The best evenings to look are February 26 – 28 and March 27 – 29. In this part of the world people often call it “the old moon in the new moon’s arms”. 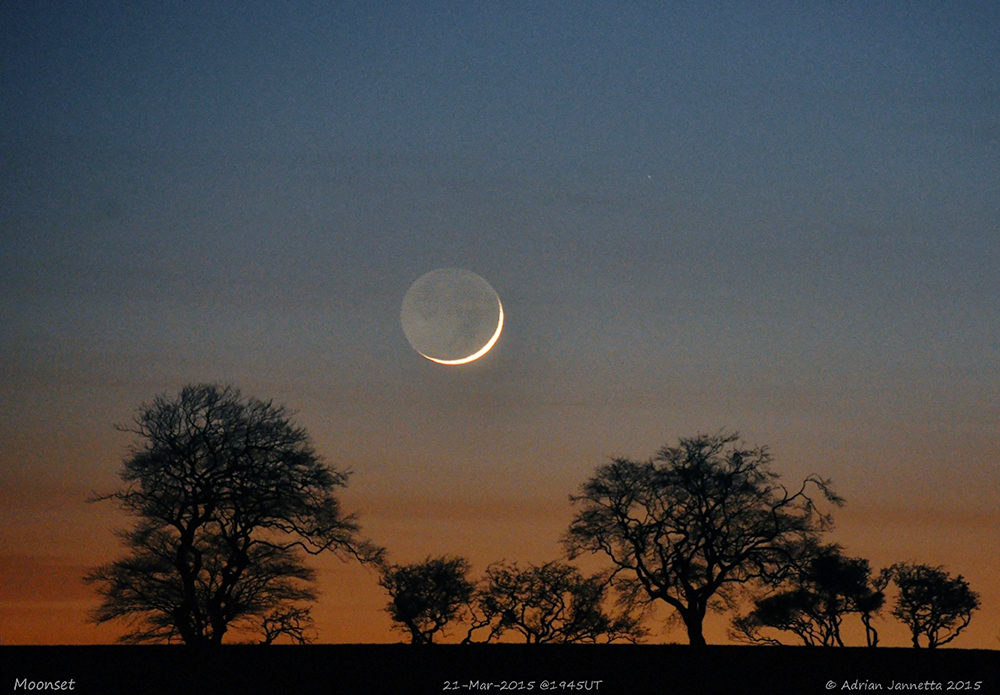 >”The old moon in the new moon’s arms”. Photo by Adrian Jannetta

Bright planets
As soon as the sun goes down you can’t miss the planet Venus shining in the western sky. It is brighter than any star in the sky and it sets more than four hours after sunset. During February, you might also spot the innermost planet, Mercury, in the same part of the sky. It doesn’t shine as brightly, but you can catch it from about 45 minutes after sunset – to the right and below Venus (and closer to the horizon). Early risers can see three more planets in the dawn sky: look southeast to spot the brightest – Jupiter – low over the southeast horizon. Orange-red Mars and cream-coloured Saturn are also nearby. All three planets will become easier to spot in the months ahead.

Equinox and the Aurora
These are lean years for UK aurora chasers! The frequency with which they appear is correlated with solar activity and we are currently experiencing a deep solar minimum with few sunspots and very few solar storms leading to strong aurora. However, during the equinox, the magnetic field of our planet is tilted at a more favourable angle to the Sun making the appearance of the aurora a bit more likely! It’s always worth checking the northern sky in the weeks either side of the spring equinox on March 20. Visit the website spaceweather.com or download one of the many apps for your phone to stay up to date!

Betelgeuse
By late winter and early spring, the stars of Orion have moved into the western sky – look for a prominent line of three stars (known as the Belt). The bright, orange-red star above the Belt is called Betelgeuse (usually pronounced Beetlejuice. Try not to say it three times.) Betelgeuse has been making the news in recent months! It is a celestial heavyweight of a star known as a red supergiant.
These kinds of stars are near the end of their brief lives and destined to go out with a bang. A violent supernova explosion will destroy Betelgeuse when nuclear reactions in its core eventually stop. This is likely to happen at some point in the next 100,000 years. However, there is a big margin of error since a lot of measurements of Betelgeuse (its exact mass, age and distance) are very uncertain.
Betelgeuse began to fade last year and is now as dim as it has ever been in recent history. This has fuelled speculation on social media that the star might be about to go supernova – exploding to become as bright as the full moon in our night sky. The reality is that brightness variations like we’re seeing are expected with stars like Betelgeuse and are not an indicator of an imminent explosion. 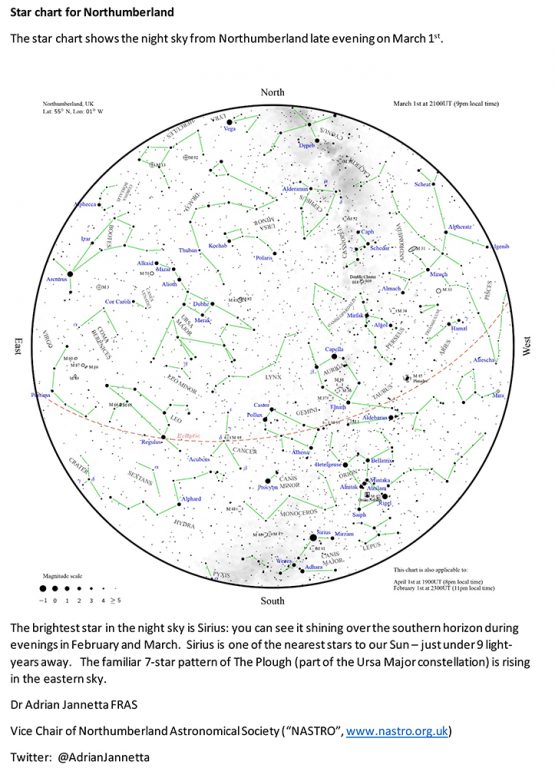 >Star chart for Northumberland for March 1 2020. Image by Adrian Jannetta