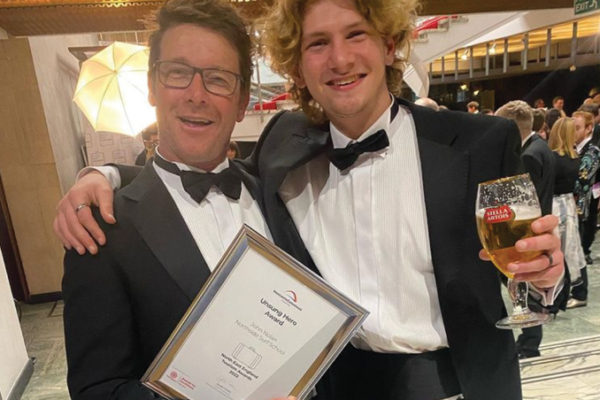 At the North East Tourism Awards in March, Jon Nolan of Northside Surf School was presented with the Silver Award for the category Unsung Hero. This recognises an individual working for a tourism business who excels in their role and deserves to be commended for their work and commitment to the industry.

“I was truly overwhelmed” said Jon “to come second in this category out of all the businesses in the North East”.

Jon, along with colleague Jacob had been involved in three rescues last year while taking lessons. He said, “You’re always aware of things around you when you are on the sea. The beaches on the Northumberland coast have some deceptive rip tides”.

Jon highlighted that in summer last year the staycation brought a huge increase in tourism. “The beaches were rammed and many were thinking they were in the Mediterranean. They did not understand how things can change”.

Readers may remember in Issue 129, The Ambler recounted how Jon and his assistant Jacob Poulton rescued three swimmers who had got into difficulties at Cresswell beach. Both surfers then also had to break away from a lesson at Bamburgh to rescue families who had got into trouble or become tired as they underestimated the strength of the currents.

Jon said, “The award is fantastic but you can’t turn a blind eye, even though it disrupts our lessons. I think that what we did is just part of our duty of care”