Amble Links: back to nature 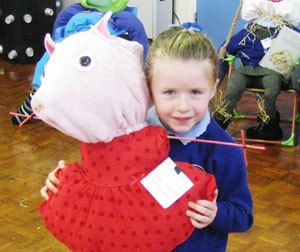 Amble Links First School held its fourth annual Scarecrow Competition during October.  The judges were really impressed with the variety and quality of entries which ranged from a hedgehog to Peppa Pig and  more traditional scarecrows. Thirty families took part in the competition and the winners were awarded their prizes at the harvest assembly. 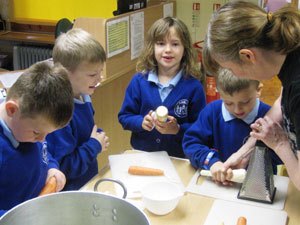 As part of Amble Links school harvest celebrations, the children brought lots of vegetables to school.
They peeled, chopped, sliced, diced, and turned them into a range of fantastic soups for the parents to sample after their harvest assembly. Viv Douglas kindly provided a range of bread rolls from Warburtons.
Over 90 parents and friends of the school came along to the assembly in which the children performed songs and poems. The Rev Diane Westmoreland and the Rev Catherine Askew talked with us about the Christian meaning of harvest including very cleverly making lots of words from the letters of the word ‘harvest’.

We were amazed at how much soup was eaten with leek and potato being the clear favourite! A huge thank you to all of the school staff and the mums who helped make the soup for helping create such a successful morning!