Running in the family

Hot on the heels of TeamGB’s Olympic and Paralympic track heroes comes Amble’s young running stars of the future. Jessica Ennis and Mo Farrah may have competition in years to come, from the likes of Bobby, Rhiannon, Charlie and Ava 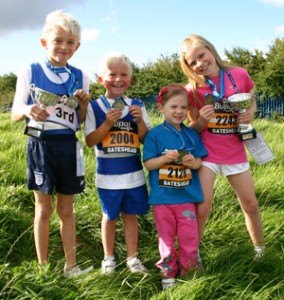 who all competed in the Junior Great North Run Mini Race on 15th September.

Over 10,000 youngsters took part in the junior event at the Quayside in Gateshead, held on the day before the Great North Run.

Eight year old Rhiannon Hedley finished her race as second place girl, while 8 year old Bobby Stone finished third in his race. The mini races are 1.5km and are so popular they are divided into waves.

“It was alright. I will probably run again next year” said Rhiannon who seemed to take it all in her stride. Meanwhile veteran Bobby was more strategic. “I came third in my wave. I was leading all the way to the end. I was really proud of myself”
And this was Bobby’s five year old brother Charlie’s second mini race. “It was fun! It was exciting,” he said “Next year I might go faster.”

Running is obviously in their genes, as their mother Joanne Stone runs and plays netball and grandmother is Olympic torchbearer Josie Goodfellow, who runs and coaches for Morpeth Harriers.
And mini Jessica Ennis in the form of three year old Ava Bremner was not to be outdone. She is cousin to Bobby and Charlie, and to Rhiannon. “I enjoyed running.” she said. And what was the best bit? “We went in Granda Fred’s car.”