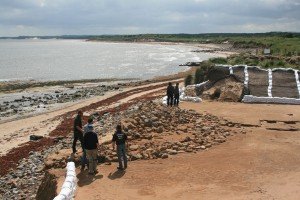 A devastating sandstorm or tsunami was likely to have taken place thousands of years ago, burying much of the Low Hauxley coastline, say archaeologists, as work begins on a ten week excavation on the Northumberland dunes. An ancient peat bed, Neolithic remains and a Bronze Age burial cairn are some of the exciting discoveries, as a community archaeology project begins to unearth what lies further beneath the cliff edge.

Cliff erosion over the last few years has gradually exposed part of a Bronze Age cairn, believed to date back to about 2200BC. Archaeologists believe a tsunami or catastrophic sandstorm completely covered the area at Low Hauxley around 4000 years ago, after which the place was abandoned. They are excited at the prospect of uncovering the rest of the cairn:

“What this means is, we’ve got this absolutely pristine cairn that’s never been touched since that day, four and a half thousand years ago roughly, when the sand got deposited all over it,” explained Dr Clive Waddington, project manager of the ‘Rescued from the Sea’ Community Archaeology Project. “It’s incredibly well preserved and it’s really exciting being able to excavate it.”

“We’ve got a lot of local people involved in this project; there’s over a hundred volunteers involved. We’ve got about three hundred schoolchildren taking part, there’s university students, and obviously there’s professional staff as well. It’s a good cross-section of the community and it’s a good exciting project for people to get involved in,” he said. 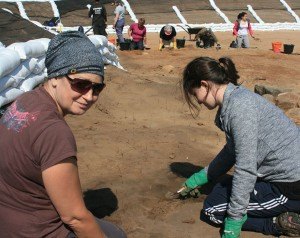 Hannah Duquemin from Amble was excited to be part of the dig and hopes to volunteer for several days. “I’ve never done anything like this before. We’ve been scraping – trying to take the top layer [of sand] off. It’s hard work but it’s been enjoyable.”

Janet Smith from Low Hauxley found out about the project after reading The Ambler. She said “I’ve never done anything like this either. But I thought, this is on my local beach, so why not. We’re enjoying ourselves.”

She plans to volunteer over five days: “The good thing about coming at different times is, I bet it’s very different by the end of July.”

The dig on the dunes has also brought a lot of media interest; Channel 4’s Time Team are making a programme about the site, as is the History Channel, and several news programmes are also featuring the excavation, which is being led by Northumberland Wildlife Trust and Archaeological Research Services Ltd.

The excavation will run until the end of August and is being made possible by a grant of £285,900 from Heritage Lottery Fund (HLF) and additional funding from UK Coal and the Coast and Lowlands LEADER programme. The land, at the northern end of Druridge Bay (just south of Amble) and close to Northumberland Wildlife Trust’s Hauxley Nature Reserve is owned and managed for wildlife by Northumberland County Council.

Mike Pratt, Chief Executive of Northumberland Wildlife Trust said: “We are all really excited about this project. Without the HLF funding, the site would have been lost to the sea, and a part of our heritage gone before it was completely understood.” 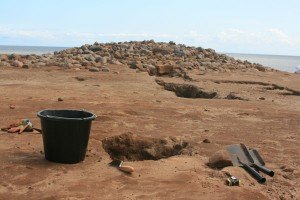 A Bronze Age cairn has been discovered on the cliff edge

Newcastle University lecturer Dr Chris Fowler is an expert on Later Prehistoric Archaeology. He was pleased his students were able to get such valuable fieldwork experience. “A similar burial cairn was found at Warkworth in the nineteenth century, where they discovered 20 burials” he said. “And burials have been found at Amble, at the pier and along the headland.”

Chris believes the devastation caused by the ancient sandstorm will help with research into how people lived in Neolithic and Bronze Age times.

“This cairn has been preserved by the sand, there is probably preserved soil in the monument from the time the sand blew over it. We don’t know exactly who the people were who lived here, but we think they have been growing cereal crops as well as herding animals.”

Clive told The Ambler that the team are hopeful of finding much more in the coming weeks. “We’ve been digging for two and a half weeks now and we’re just really getting into the archaeology. So I think the next two weeks is when we’re really going to be able to get into that cairn, find out if there’s any more burials preserved underneath it, which, to be honest we’re pretty confident there will be. So I think it’s going to get really exciting.”