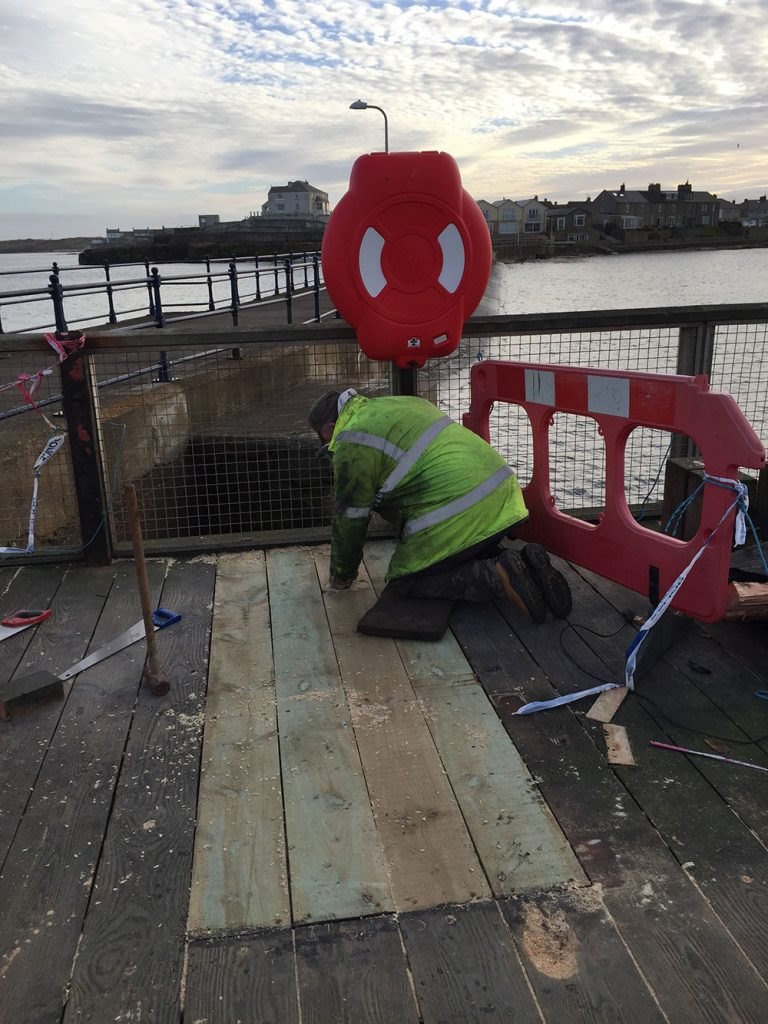 It is believed the fire on the pier was caused by embers from a barbecue. Sections of the boardwalk had to be replaced.

A fire started by sea anglers on New Year’s Eve caused damage to Amble pier and meant the structure had to be closed to the public while repairs were carried out.

At least £2000 worth of damage was caused to the pier as the fire burned through the wooden boardwalk. The incident left a hole large enough for a child or dog to fall through, so for the public’s safety, the pier was closed the following morning.

Footage from Warkworth Harbour Commissioners’ CCTV cameras shows the five fishermen arriving in a white van at Amble pier at 7.45pm on 31 December.

Harbour Master Simon Baxter told The Ambler: “They’ve set a fire, probably from a tinfoil barbecue or something similar. I actually found kindling that they’d left. It’s been an act of recklessness. They’ve probably thought they’d put it out, but there were strong winds that night, and the fire has taken hold. Our CCTV footage picks up the van, but we can’t see the registration number. It shows them arriving at 7.45pm and leaving at 1.45am, and the fire can be seen blazing at 4.30am.”

The fire was discovered by fisherman Chris Armstrong early on New Year’s morning. “I found it at about 6.50am,” he said.

“I went to check on my boat in the Marina and even though it was a cold windy morning, I thought I’d walk round the pier. I thought I was seeing things, big red sparks and I thought ‘what am I going to find?’

“I was about five to ten yards away and I could feel the heat. When I got up to it, I couldn’t believe it. There was a big hole a wheelie bin could have gone through. I thought ‘this needs the professionals’, so I rang 101 on my mobile.

“I told the police: ‘I’m a fisherman from Amble and I’ve found a fire on the pier’. He said ‘I will send the fire brigade round’. I wondered where they would pump the water from, but when they arrived they had water packs on their backs. It needed the professionals, the wind from the north was spreading the fire. There was no way it was going out.” 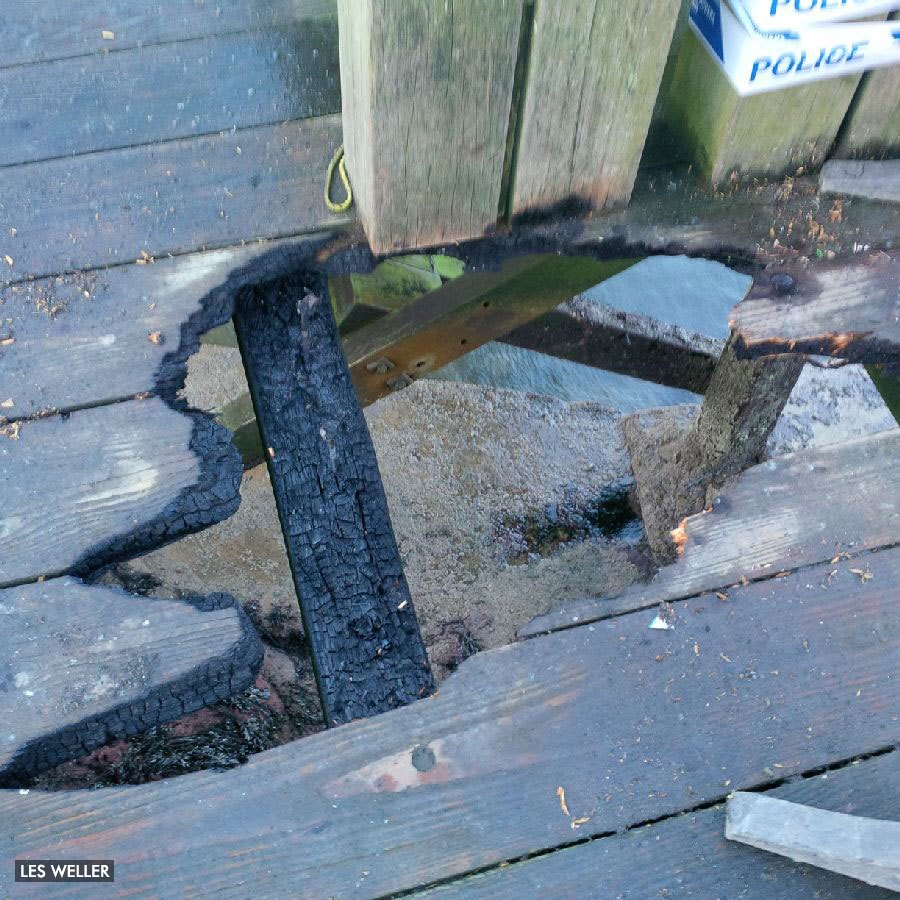 Over the years, the pier has been singed and burned many times by hot barbecues, and the damage can be seen on several areas along the pier. But the new year foolishness of these five fishermen has exasperated the Harbour Commissioners, who own the pier.

“Northumbria Police consider the incident an act of recklessness. It’s not been willful and therefore not a crime,” said Simon.

But the incident put the future of fishing from Amble pier in doubt.

“As with any insurer, if you make a claim, they want to know what you’re going to do to ensure it doesn’t happen again,” said Simon.

In a gesture of goodwill, Amble Sea Angling Club, Amble Angling Centre and Rockpool Bait are donating an undisclosed amount of money towards the repairs. This will be raised during the 40th Open Shore fishing championship on 15 January, and they have set up a Justgiving crowdfunding page: https://www.justgiving.com/crowdfunding/leslie-weller

Les Weller of Amble Sea Angling Club told The Ambler: “It’s so disappointing. It’s always the irresponsible ones who give us a bad name. I’ve talked to the Harbour Commissioners and we’re all keen to do what we can to promote responsible sea angling.”

On his crowdfunding page, Les says: “Amble Sea Angling Club promote safe and responsible angling and will themselves along with Amble Angling Centre and Rockpool bait be donating to this gesture of goodwill on behalf of the local angling community.

Footage of the fire was captured by Northumberland Gazette photographer Jane Coltman: http://www.northumberlandgazette.co.uk/news/video-amble-pier-on-fire-1-8312925

Work to repair the damage meant that the pier was closed to the public for over a week. Simon was hopeful that it would be reopened as soon as possible.

But he was sad that such an incident should have taken place at all.

“It’s disappointing that five adults don’t realise you shouldn’t have a fire on a wooden pier.”