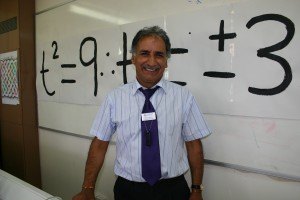 After 32 years of teaching maths to Coquet High School students, Charlie Singh, Head of Maths and an Assistant Headteacher, has decide to retire. Anna Williams, Laura Park and Matty Stanton caught up with him just before he left.

Of course we tackled the big question first: How does it feel to be described as “a legend” by so many current and former pupils?
Mr Singh laughs, “It’s nice… but I’m embarrassed about it. Laura Mackenzie set up a Facebook site [entitled ‘The legend that is Mr Singh’ and which has nearly 550 members]. My daughter was miffed because I’ve got more people on there than she has!”

How would you describe your attitude to teaching?
“I was under no illusions, I had no interest in becoming a Deputy Head or whatever. I enjoy what I do in the classroom. I thought if I went off and became a Deputy Head, that all stops. I made that decision about 25 years ago – also to stay in Amble. I think the pupils here are lovely. I think some people don’t realize what a lovely place it is – it’s a wonderful place to work.”

So why retire – what are you going to do instead?
“I’m going to try to improve my golf!! (laughs) “ If I was going to stay in teaching I’d have stayed here. It’s a good time to retire because there are a lot of changes, so it’s a good time to go. It’s sad to leave any class and I have two brilliant classes in year 11 and one in year 12, so in that sense it’s never a good time. But they are very hard working and they deserve success.”

What’s your secret, why are your classes so popular?
“I’m very fair with pupils, but very strict. It doesn’t matter who it is, I apply the same rules. I have fun, I’m relaxed. My one rule is; no-one talks when I’m talking. People are very easy to talk to round here. I’m just another person in the school. It’s a big family. It’s like that saying: wherever you feel most comfortable is your home”

With an honours degree in Maths, but no formal training in teaching, nevertheless Charlie Singh was taken on to teach A level maths at West Denton High School, before leaving to join Coquet High in 1978 which at that time was based at Broomhill.

“Subject knowledge is one thing, but delivering the teaching is completely different” says Charlie, “Teaching is about communicating and I get on with people very well. It’s important to have a bit of fun in the class, but I have never made fun of anyone. I laugh with them in class, but no one wants to be made fun of.”

Charlie also mentored new teachers and student teachers who came into school.
“I like to pass on information that’s not written down, giving advice and supporting them.”

How do you feel that the new Maths teacher is actually one of your former pupils?
“Simon Welsh is someone I taught 14 – 15 years ago. It was a strange feeling when he first came to talk to me about this vacancy. He was by far the best candidate.”

Mr Welsh has reportedly said he is looking forward to the challenge of replacing Mr Singh but feels it is going to be strange.