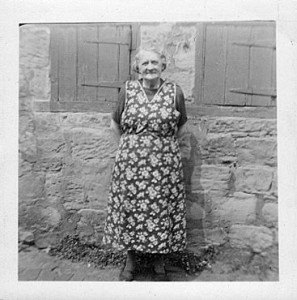 Norma Hinson, a member of  The Ambler team, called her mother’s mother “Grandma” but noted that her grandmother was very proud of all her names.

Elizabeth Alice Jane (Macdonald) Dawson (known to family and friends as Jean) was born in Montrose, Scotland, in about 1886.
Jean was the first of five children, not unusually born at home, and lived with her mother and four siblings in Montrose while her father was away at sea for two years at a time. Happens that the children were all born in late November, every other year.

In 1898, when Jean Macdonald was just 12, the family came south, to live in Amble. Norma’s mother used to describe the scene of her great-grandparents and their children and luggage on the Amble quayside, having arrived by boat. It is likely that her great-grandfather had visited the port while a full-time seaman. The family first settled into a house at the end of Blackwood Street.

Some time before 1911, Jean married John Dawson, better known as Jack. Their son Edward (Ted) has family still living in Amble. A daughter died aged 21. Norma’s mother, Elsie, was the youngest of the three. For a time the Dawsons lived at 53 High Street.

Jack Dawson was a trimmer on the boats that were laden with coal brought down to the Harbour by rail. As a wagon tipped its load into the hold, a pair of trimmers would ensure that the coal was level and evenly distributed. The boat owners paid the trimmers, one of whom was responsible for collecting and sharing out the money.

During the First World War the Dawsons had moved south to Newcastle where Jean’s parents were living. Grandma Jean had taken a rather unusual job for a woman: she was a foreman on a building site in Newcastle. The War over, the Dawsons lived on Gibson Street back in Amble.

In her later years, after her husband had passed away, Jean enjoyed a half-pint shandy once a week at the Wellwood Arms with a friend, Mrs Hall.

Jean Macdonald Dawson died in 1963. During the last five years of her life, Jean stayed at home. She listened to the radio at night, discussing what she’d heard the next day. More remarkable, perhaps, were the many changes she had seen in Amble in her lifetime.