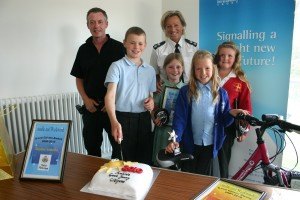 Young citizens were recently recognised and rewarded at a presentation held in Amble. Presented by CSO Darin Fawcett the Young Citizens Award was held to recognise those young children from within the Amble area whose behaviour and attitude had gone above and beyond in school and around the community.

CSO Fawcett currently holds talks in schools regarding dealing with the subject of stranger danger and about being a good citizen. It was the latter which inspired him to come up with the Young Citizens Award.

Commenting on why he came up with the awards CSO Fawcett said “Good kids should be rewarded.” He also thanked all of the sponsors for kindly donating prizes for the young people.

In order to be nominated for the award the children had to have shown good work and helpful behaviour in their schools and within the community.

Inspector Sue Peart opened the ceremony explaining why the children where being recognised. “Young people are often stereotyped and receive bad press due to a very small minority whilst the vast majority of good young people are ignored. We are here to celebrate and recognise outstanding young people, as it is vital to reward them for their behaviour”.

Inspector Peart then went on to say that she believed that things in Amble have improved over the last few years and that we are seeing a real change for the better.

Each young citizen was presented with an award and a goodie bag with a bicycle also being given to the overall winner.

Brenna Jamieson was selected as the overall winner and was presented with the bicycle by CSO Fawcett and Inspector Peart.

Brenna said “I am gobsmacked to have won” and said she was very happy to have won a bike.

This award ceremony was the first to be held and was offered to children in the First schools, it is hoped that this will be expanded to also include the middle schools in the future.

If anyone would like to contribute to next year’s Good Young Citizens Award, please contact CSO Darin Fawcett on darin.fawcett.4089@northumbria.pnn.police.uk