Thank you for [sending] The Ambler. Very interested to read Ian’s letter with photos of Island View. I have the same old photo/postcard, but taken at a different angle – from the side of the houses – you see more of the children.

Ian is right, the houses have definitely changed.  The whole place has altered since I arrived in 1972.

Back then, things were very primitive all houses one up, one down, no main gas, no phone line (I had that put in). There was electricity, communal toilet in the yard, small gauge, low pressure water supply,  if No..1 turned the tap on, you did not get water at No.6.  When we had built the extension, we now had a bathroom it took about 4 hours to fill the bath.  By that time the water was cold!

The sea wall, built in the early 30s by the man who then owned Island View, is now eroding we have to brick-up the very large holes in the wall lowering buckets of cement and bricks over the top onto the shore.

The worst thing was the sewage system (no main till 1980); Septic tank discharging onto the shore. Periodically, there would be a blockage, causing back – flow to the house!  The tank had to be cleared out with rods and a large sieve. You also needed a strong stomach and a 1940 gas mask.

Sometimes, people would come up to the house from the shore to complain to me about the effluent.  I referred them to Northumbrian Water.! I used to think, which will get us first, the sea, the back – flow or a combination of both. In the end, it was human.    How we lived!

I would very much like a copy of Ian’s 2008 photo – this shows the porch we were not allowed to build and the bedroom windows we were allowed to put in!   I can see how much the links have eroded since I lived at Island View.  How long before it is actually an Island?

Would Ian be very kind and send me a copy of his photo? Also, if he is local, he might be able to help me with some information.
Kind Regards,
Sally Gordon  Devonshire Rd, Oxton

I would like to thank Beverley Robinson and Siobhan Henderson who took part in the Run For Life at Newcastle. They raised £218  and donated it to CLIC  (Cancer and Leukemia in Children)
It was in memory of their dad/granddad (Douglas “Douggie” Brown). He spent his life helping the youth of Amble. There were no swimming baths then and he spent all his spare time teaching the children to swim. Because of his love of children the family felt it appropriate the money should go towards a cause helping children with Cancer.
Many thanks
Florence Angus  Queen St, Amble

I am following up my family history and around 1880 James Howey and his wife and children lived in Amble.  He was a coal miner and they had been married several years before in Thropton Presbyterian Chapel.

Things went badly wrong for the family.  I was in Woodhorn recently and the burial records for the East Cemetery contained five of the family in just over two years – both parents and three children.  I wonder if anyone can suggest sources of information about life in those days and perhaps what might have happened.
Many thanks
Bill Richardson   wpr3@tutor.open.ac.uk

Irene and George Hall would like to thank everyone who helped and supported our Macmillan Coffee Morning on September 24.th this year. Unfortunately the weather was against us on the day but the sum of £308 was raised and has been forwarded to Macmillan Cancer Support to help research into the causes and cure of this deadly disease.
George Hall  via email 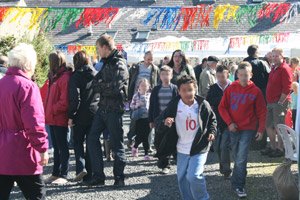 The team of helpers for Hauxley Fun Day assembled on Sunday evening with some trepidation to prepare the village square with bunting and gazebos.  It had rained off and on all day and the wind had been gusting to 45 mph.

As August Bank Holiday Monday progressed however, the wind dropped and we were blessed with good sunny weather.  This of course brought out the crowds and they had lots to keep them occupied.  For the very young there was face painting and the two bouncy castles, with the slightly older (and some parents as well!) enjoying the sand castle competition.

There were the usual prize and cash tombolas, plate smashing and coconut shy, and a huge bric-a-brac stall selling a vast array of items including books and toys.  The “Feat of Strength” was well used by both parents and children who were then able to cool off with a well earned ice cream. The pet show was a great success.  A long queue of people assembled to have their fortune told by our clairvoyant Myrna. Our local artists put on a display of their artistic talent, with particular emphasis on local scenes, which proved to be a great success.

Refreshments in the hall with  homemade cakes were enjoyed by many. The bar did a steady trade, but the BBQ was absolutely swamped with five helpers struggling to keep up with demand.  The “Hauxley Pork Sandwiches” reputation has obviously spread even further afield.

We were very pleased to be able to give space to the RNLI for their stall which we understand did a good trade and in part made up for the previous day when they were forced to close early, because of the weather.

We were also able to run a separate art raffle once again thanks to local artists Jimmy Thompson, Irene Hilsden and Dorrie Brown.  We are really grateful to these folks  for their support.
Finally we must say a huge thank you to everyone who came to Hauxley on the day.  We rely on you to come and support us and we are extremely grateful that you do so every year.
Hauxley Village Hall Committee

A visit fit for a King

The sixtieth anniversary dinner was a huge success in regards to Ray King.  In fact  the whole weekend was I’m sure, a real pick me up for him, after a torrid last 12 months, since losing his loving wife Norma.

When we first arrived at the Port Vale Football Club’s main entrance, we were held up by supporters young and old wanting to meet Ray and get his autograph etc. Eventually we made our way to the function room. We as ex-players were introduced into the room, and as Ray’s name was called, the whole room stood up to applaud him.   What a tribute.

On the Saturday Ray was again invited by the club as a special guest to the game between Port Vale and Aldershot. All the arrangements were put in place by a Vale director Mr Graham Mudie (his father was a well known professional footballer). Graham and the club must be given great credit on their efforts to welcome him. Ray and our party were allowed an executive box, accompanied by Graham and a well known friend of Ray’s; Brian Herbert. Brian often rings Ray to keep his spirits up. Ray was then taken to the Directors’ Box to be introduced to the crowd, another wonderful reception. When he came back to the box, one of our ex – players, Ken Hancock had brought a very good friend of his, Pete Conway (Robbie Williams’ Dad.) Ray didn’t know who Pete was, but after an introduction, Pete produced an old autograph book, and told him that Ray had signed it for him many years ago, when Ray was Pete’s hero, so what a topic of conversation that was.

Ray had mentioned to me about a former Crewe Alexandra and Stoke City player who played in the same England ‘B’ side as he had in the 1950s. They became good friends but in the latter years they had lost contact. Eventually we tracked down the player “Johnny King” (two Kings, no relation), who only lives about 15 miles from Port Vale Football Club. I told him about Ray wanting to get in touch, so Johnny rang Ray. So contact was re-established. Even better, once we knew Ray was coming down to PVFC we arranged for Johnny to come over for the match and meet up with Ray. He joined us in the box for a wonderful afternoon.

As I mentioned earlier Brian regularly rings Ray and made quite a contribution in getting Ray to come down. Brian’s main comment is “’Ray the Legend’ must never be forgotten.”
So much had happened in such a short time and although it was very tiring for Ray, it was more than compensated by the fact it’s given Ray a real pick me up. We just hope he keeps well and maybe it won’t be too long before he visits us again.

I also would like to thank Ray Shaunessy and his wife who are volunteers working for PVFC. They rang Ray to tell him they would deal with the transport side of his visit. He said they were wonderful company and nothing was too much trouble.

So a wonderful weekend enjoyed by a lot of people, especially Ray. Once again thanks to everyone concerned.
John Poole
Ex PVFC player  Smallthorne Stoke-On-Trent

One thought on "Your letters & email:Oct"