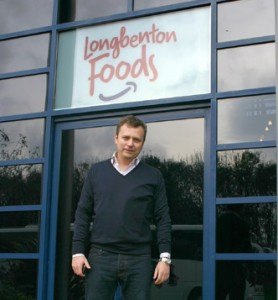 Seventy jobs have been rescued now that Northumberland Foods has finally been bought by another company. There is hope that more redundant workers could be reinstated if the factory’s new owners can turn the company’s fortunes around, with some temporary staff being needed before Christmas.

“We are aiming to get 100 jobs back into the community. You might say, well there used to be 240, and we would be happy for there to be 240 – 250, but the factory needs to be both profitable and sustainable. Let’s get it up and running and take on up to 100 people to start with, which should be good for the community.

“This factory has been in administration twice in the last 18 months. We haven’t bought it to let it go into administration again.”
Mr Engen explained that one of the ways they hope to keep costs down, is to combine skills from both the Amble and Longbenton factories. “Here we have 72 [ex- Northumberland Foods] employees, but as for management, we’ll use the team we already have. We don’t need two sets of overheads.”

Later he told The Ambler: “We are confident that we will need some short term workers on the run up to Christmas, but realistically it will be around June before we are in a position to have all 30 back.”

He stressed that this forecast was dependent on securing more business for the factory, but he said “It’s looking positive.”

Mr Engen who is originally from Norway has been working in the frozen foods industry since 1997, the last five years in the UK including working for Findus.

Longbenton Foods are the company who bought the former Findus foods factory in Longbenton. They received £2M from OneNorthEast to rescue the factory after a fire devastated the building and hundreds of people were made redundant.

A fire broke out on one of the production lines on Nov 11th, causing workers to be evacuated from the building. No one was injured and work resumed on the other production lines. “We haven’t been able to produce on one line for a fortnight, but it hasn’t changed our plans” said Vidar Engen “Rewiring has been the largest job but we are hopeful the line will be back in production next week.”