Hello and wecome to the Halloween edition of Artograffi, we hope you are really freaked out when reading some of the spooky stories that we’ve created.

The Stowaway
In 1754 there was a man called Marco and he was a stowaway on the blue sea boat and they travelled from India to England. When the blue sea boat docked, Marco ran and hid for so long that he wanted to leap out of the well that he hid in for 2 long years. When he tried to open the gate to get out he forgot that when he shut the gate the lock was on. So he eventually died after 6 years locked in. Now his ghost still wanders all over England looking for the blue sea boat once more.
By Aleshia Barnes

Pets on Bonfire Night
On bonfire night many people around the country are setting off fireworks and spending time with their family and friends to celebrate Guy Fawkes. But while we are all enjoying ourselves, our pets are frightened because of the loud noises caused by fireworks.

GAMU THE AFRICAN SLAVE
Hi I’m Gamu and this is my story.

In the year of 1793 a boat filled with African slaves set sail towards old London town. The captain (who was very big and not very clever) felt on top of the world. He thought that all the slaves would be with the master’s right hand man who would be waiting at the docks to collect them. He thought that after all the slaves were gone he would turn towards the hotel, were he would be fed and have as much of the ladies he would want.

He thought that the next day he would be able to leave just before day break, arrive at home around tea time where his wife would be waiting with open arms listening to his lies about going straight to bed that night alone. He knew that an hour later his wife would smell the cheap perfume all over him, and then ridicule him for cheating on her, say its over between them, then after packing all the things she would then give him another chance, saying to her self the next morning that he’s only human and every human deserves a second chance.

What he didn’t think of though was a slave getting out, a slave running away, a slave causing havoc through out all of the little town called Amble. This slave would put a jolt in history. This slave is me.

Betsey Johnson
Betsey Johnson is a fashion designer from London. She creates very cute and colourful fashion collections including the infamous ‘Betsey Crockers’ fall 2010 collection which was a very bright, bold and playful range. Her website is: betseyjohnson.com/ if you want to have a look. Betseys things are very very wearable and more appealing to people than big brands with stuff you’d never wear. Everything is themed too. She designs very quirky clothing too so it’s just as amusing looking at her website.

New Dinosaurs species discovered in North America
Scientists have found two new dinosaur fossils. Called the triceratops and the utahceratop gettyi and no one has ever found these types of dinosaur fossils until now.
Scientists think the new dinosaurs were plant eaters.
They believe they had 15 horns, a large head and were about the same size as a Rhino.
They were found in Southern Utah
On both dinosaurs the horns ranged in length from 6 inches to 1 foot.
By Mary Bergan

Halloween in Bahrain
The seasons in Bahrain are mostly unnoticeable, but the one season that is noticeable is Halloween, because it gets not just hot, it’s humid. Many schools celebrate Halloween. The Bahrain School played host to students from many of  the local schools. They had games, activities, and a very haunted house for the older students and a not-so haunted house for young ones, Halloween is really a fun thing for kid’s of every age. Bahrain even has bats! They are called sand bats, and at night they hide and wait to bite a big person- well when I say that I mean fat.
If you are so unlucky to get bitten by one you must go straight to hospital. During the day sand bats hide in the sand because they blend in and hence their name.
Bu Jacob Livingstone

Spurreli
The day after the Spurreli ice cream boutique’s grande opening, we went across to interview the boutique’s owner ‘Nick Spurr’ who has dreamed of making ice cream for 20 years. Nick who also owns the boatyard which neighbours the parlour, started the business on the 24th of August with his family. After being trained by ‘Gelato’ chefs (Italian ice cream chefs), Nick’s family have made 24 flavours of gelato, most are unique. The ‘Cupcake ripple’ ice cream is my favourite.

All the ice creams are natural flavours and they use no colouring therefore the bright pink colour that the pear drop is, is totally natural. Can you believe that natural stuff can make that colour? We even saw how they were made, it’s a long process from liquid to solid with all the professional equipment they use. We won’t spoil it for you though so if you want the secrets spilled, go see for yourself. You can watch through the window or even ask to see how its made.

Spurreli is located beside the boatyard, in between the town square and market. They also sell coffee, tea, milkshake (which is gorgeous), patisserie, sundaes and cupcakes.
Written By Amber Brown

Researched with Alysha and Aleshia

What’s the difference between Halloween in the UK and the USA?
Halloween in the UK and the USA is completely different. Here in the UK, people may decorate their houses, hold Halloween parties and go trick or treating, but in the USA Halloween is totally different, with preparations starting in the middle of October. I vacated Amble to go to Florida on the 12th October and when I arrived at the magnificent main Disney theme park, Magic Kingdom, all the Halloween decorations were already in place! In the U.K during the late 70’s and early 80’s people cut scary faces out of turnips not pumpkins. However soon after that Halloween was ‘Americanised’ and the pumpkin was used. So, in conclusion, Halloween in the UK is like a one-day event but in the USA it’s a massive festival!
Written By  Andrew Mounsey 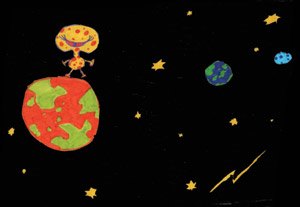 Astronomers have discovered a planet that people might be able to live on. It is a similar size to Earth and is the first planet outside our solar system to be found, that it might be possible to live on. Unfortunately it is so far away that you would be dust by the time you got there!

The astronomers spotted it while using a telescope in Hawaii. The planet circles a sun called Gliese. They say that it is in the “goldilocks zone” which is connected to the goldilocks and the 3 bears story.It means the planet is in the perfect place from its sun. Not too hot and not too cold, just like the porridge.