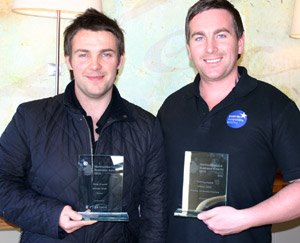 Zecca won the Keep It Local award, while Premier Corporate Training won the Training award. Organised by Northeast Press, this is the third annual event promoting businesses and entrepreneurs in the region. This year the main sponsor was Northumberland Business Service Limited (NBSL). Over two hundred people attended the dinner held at Linden Hall.  In all there were 10 award categories, with four organisations shortlisted per category.

PC David Rathband was the guest speaker at the ceremony. He praised the business leaders, telling them that whatever bad things may happen, they should consider themselves lucky because there are always people less fortunate.

Mark said “We’re really committed to Keeping It Local; using local produce and employing local people. I’m very proud, from our point of view, being a new business, it’s good to be recognised and get plaudits from the business side of things. PC Rathband was very inspirational, he said it’s nice at the end of the week to go home and know you’ve done your bit for the community.”

Bruce Durham was delighted with his award. “It’s good, these are prestigious awards, so to beat others in my category, some of who are large organisations, it lets us know we’re doing something right. It’s an endorcement of all we’ve done, and it proves that it works” he said.