The weekend day of rest proved to be just the opposite for Amble RNLI Lifeboats with two launch requests received on Sunday. As always, the volunteer crewmembers sprang into action despite the difficult conditions on the day – both for driving to the station, as well as launching and crewing the rescue vessels once they were at sea.

Reason: Humber Coastguard requested the immediate launch of the Amble Lifeboats after they received a report of a sailing dinghy capsized at Alnmouth estuary with 6 persons on board. Both boats launched and got approximately half way to the casualty in Alnmouth bay when Rescue Helicopter 131 from Boulmer RAF Station reported that they had two casualties on board and the other four where safe on the shore. The two casualties winched to safety were taken to Wansbeck Hospital suffering from hypothermia. Both Lifeboats were then stood down and headed back to the station, but due to the very poor sea conditions and 3-4 metre broken swell with heavy snow, the Inshore Lifeboat (ILB) was asked to report in every five minutes until they were safe inside the harbour. 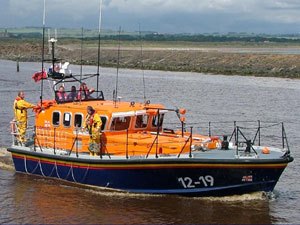 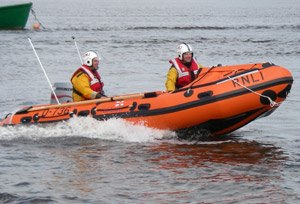 Reason: Humber Coastguard requested the immediate launch of the Amble Lifeboats after they received a report of a person in the water threatening to harm themselves just inside the entrance of Amble Harbour. As the crew were assembling, news was received that the person was safely ashore and the local Police and Coastguard were on scene and in attendance. The launch was then cancelled.