Supermarket plans: tweeting at the meeting 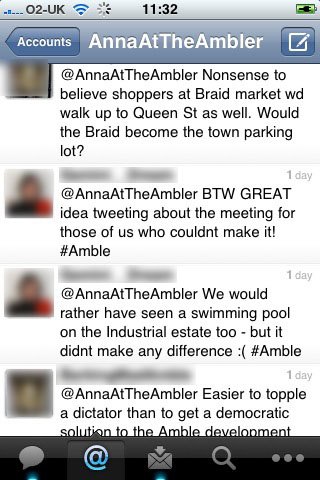 Around sixty people attended Amble Town Council’s planning meeting on Feb 1st, to hear or participate in discussions about the new supermarket design plans. Here are my tweets as the meeting took place (apologies for spellings and typos!).

Several people joined in online, and were able to add their voices to the debate, but I have not included their comments below. I have sent in some of the comments they made to the Town Council, although the question “Anyone else out there with any suggestions on what £60,000 could be spent on in #Amble?” drew a few amusing answers which I didn’t send in.

For those of you not on Twitter, the @ symbol refers to a person and the #symbol is an easily searchable subject -(eg you could put the word Amble into twitter’s search box and any recent tweets with #Amble in them would appear)

All tweets below are from me @AnnaAtTheAmbler on Feb 1st.

At the Amble Town Council planning meeting where there are a lot of ppl. Tesco plans are on the agenda

There’s about 60 people here. Council explaining there will be no decisions made it’s theCounty council who make planning decisions #Amble

Only supermarket plans discussed tonight; housing not part of this planning app

Ppl asking questions already : could supermarket be built without housing?

Now a call for an independent chair for the meeting

Still discussions over what the meeting is about

Exasperation expressed that meeting is going in circles

Speaker from North View concerned over potential noise & light. Upset with town councillors but invites them to tea!

Speaker calls for public inquiry & proposes resolution: to put plans on hold  info [could be] given via leaflet drop Nland Gazette & council mag

Speaker making point that access to site means ppl wd have to drive out of town to get to supermarket.

speaker thinks supermarket will go ahead without housing. He has set up a competition to win a meal at Zecca

Speaker says shd vote for plans or the height of the bldng may increase. Plans now are for 6m high ( reduced from 9m)

Speakers against plans reiterating many of their original points.

Question about the land the proposed road would be built on. Who owned/sold land & was the sale advertised?

Council wants to move on. Many voices protesting. Call that detailed plans still not discussed

Anyone else out there with any suggestions on what £60,000 could be spent on in #Amble ?

For those interested in the competition to win a meal, mentioned at the supermarket planning meeting last night: http://j.mp/gxlkZN

Fyi the competition & the website are run by one of the protestors against the plans.

One thought on "Supermarket plans: tweeting at the meeting"