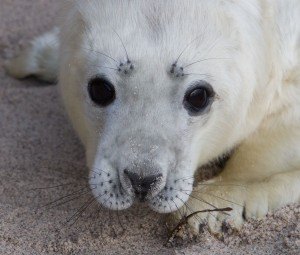 Seals have been loafing around Coquet Island for many years and the RSPB wardens have been monitoring their numbers each year. Seals “pup” in the winter and this year the island already has its very first white fluffy seal pups.

Two appeared early in December, at the height of the bad weather and a third arrived a short time later.

The RSPB has stepped up its counts, and is finding the majority of seals are visitors from the Farnes, and some are from as far away as the Isle of May.

Wesley Davies, one of the RSPB resident wardens explained that the number of pups born on the Farnes was the highest for many years, so it wasn’t unexpected that one or two might be born on Coquet.

Some seals are tagged with numbered markers which are easy to read, whilst pups are marked with a harmless dye, so it’s possible to trace where they have come from. The Coquet trio have now moulted out of their white puppy fur and  joined the throng of seals in the water around the island.

Seals aren’t always good news – if they manage to get onto the plateau of the island, they would quickly destroy the fragile soil structure and puffin burrows, as they have done on the Farnes.
Volunteers have been building small dry stone walls at the entrance to the pathways from the foreshore to the plateau, to act as seal barriers and restrict them to the beach and rocks.
Paul Morrison