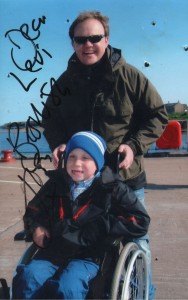 One of the young people of Amble has become a television star recently. Levi Taylor, aged ten, of Links Avenue appeared on CBeebies’ “Something Special” in October and the programme has been repeated recently.
In the programme Levi and another pupil from Barndale School travelled by boat from Seahouses to the Farne Islands with Justin, the presenter (who also appears as  ‘Mr. Tumble’).
The programme is carried out using sign language, which Levi learns at Barndale as part of the curriculum, even though he has no hearing problems.
During a week’s filming of various activities at the school Levi really enjoyed being in front of the camera. The producer told Levi’s mother that Levi “was a regular performer” and it was necessary to do fewer takes than usual because he seemed to know exactly what was required.
All this is in spite of the fact that Levi suffers from spina bifida and spends most of his time in a wheelchair. He certainly suffered during his first five years, with various operations, including losing his left eye to cancer. His mother says this does not dampen his spirits at all.
Last year he won an award in the game of Boccia, which is apparently similar to bowls. He represented the area at Gateshead Stadium and was presented with his prize at Alnwick Playhouse. Again he happily and self confidently went on stage to receive it.
Another possible operation to his spine is in the offing, but what else will Levi be achieving? Anything seems possible.