It was an early start to Sunday for the volunteer crewmembers of both Amble RNLI Lifeboats as their emergency pagers went off early in the morning requesting a launch to assist a local fishing vessel which had drifted onto rocks approximately 1 mile from Amble harbour at Coquet Island. 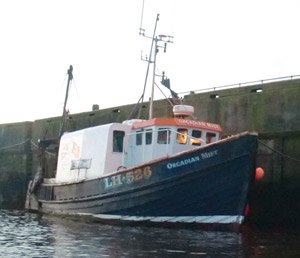 Reason: At 05.44 hrs, Humber Coastguard requested the immediate launch of the Amble All-weather lifeboat “The Four Boys” and the Inshore Lifeboat (ILB) “The Rosemary Palmer” when they received notification that a local fishing vessel “Orcadian Mist” with two persons on board had drifted onto rocks nearby. Both boats were launched and went to the immediate assistance of the vessel which had ran aground on Kinch Rocks at the South-West corner of Coquet Island. Upon arrival at the scene, another local fishing vessel “Bold Endeavour” was standing by to provide assistance and had a rope ready for Orcadian Mist should it have been needed.

It was established that Orcadian Mist had become fouled on underwater fishing ropes and as such, had lost propulsion which had caused her to drift onto Kinch Rocks where she remained stuck. Using the ILB, Amble Lifeboat transferred a tow rope across to the stricken vessel and once the tow was secured, gradually released her from the rocks with the assistance of the incoming tide to prevent any damage to the hull of the vessel. After she was clear of the rocks, she was then towed back to Amble harbour and back to her home berth where she was tied up and made secure ready for repairs to the fouled propulsion problem. Both RNLI Lifeboats then returned to station and were re-fuelled and made ready for service again.

The Amble RNLI Coxswain for this rescue John Wingfield went on to say “It was fortunate today that we had a calm sea for this incident. Had the conditions been worse, this job would have been very different at that corner of the island which is known to be rocky and shallow. Fortunately, the weather was on our side and that helped us make a safe and simple extraction from any potential danger. As always, the intensive training our crews undertake ensured that things went nice and smoothly and we were glad to be of assistance”