Here’s looking at you, Tim 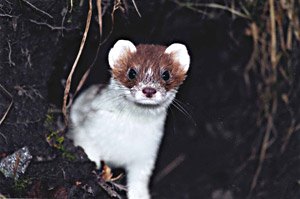 Tim Mason, a retired teacher from Amble, was visiting the Hauxley reserve last December when he took this photo of a stoat, partly in its seasonal ermine coat.

He had watched the stoat chasing a rabbit, which it caught. As Tim tried to get close enough to take a photograph, the stoat saw him and shot down a rabbit hole.  The rabbit recovered and took off. Tim waited patiently at the hole and was rewarded when the stoat reappeared and peered out.

Tim won third prize in the 2009 competition with a shot of a butterfly, also taken at Hauxley.

Hauxley is a far cry from Tim’s wildlife photography beat on the Falkland Islands, where he worked as a head teacher at the British forces primary school before retirement.  Tim is a valued member of the Trust’s Hauxley Warden Group.