A new campaign website has been launched called Keep Amble Special so that the debate about the new supermarket and its effect on Amble can continue online. The aim is to ask people to help identify what makes Amble such a special place and to use this to attract more tourists to the town. 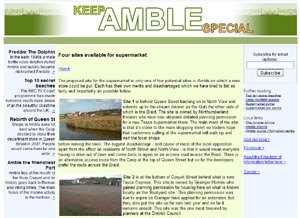 Roger Armsden recognises that most people in Amble want a new supermarket so that they have more choice and hopefully lower prices, and “right now new jobs are obviously very important to the town”. Roger has therefore launched the Keep Amble Special campaign. “But it’s important to think about how the new supermarket is going to affect the town. The Ambler Website is doing a great job in encouraging online debate, but there are plenty of issues that have yet to be discussed” So this new campaign website is the place to visit to follow and contribute to the on-going debate.

The website (www.keepamblespecial.co.uk) includes comments on what makes Amble a special place, more information on other potential sites for a supermarket, the latest research on whether supermarkets really do create the increase in jobs that’s claimed, what’s likely to happen to the 16 affordable homes promised as part of the scheme, and Freedom of Information revelations about a deal to sell part of the Braid that have been “kept secret until now”.

The campaigners say, “To encourage people to let us know what makes Amble special for them, we are running a competition in the latest Ambler with the prize being £50 of free groceries from Heron Foods.” The Braid is unique and for Roger it’s one of the most important things that make Amble special, which is why he wants to see it kept “the way it is when other alternatives for the supermarket or access route exist.”