D:Ream ‘Gods In The Making’

Things definitely got better. Through the power of Twitter, D:Ream band member Al Mackenzie has sent a version of their new track ‘Gods In the Making’ especially for The Ambler. 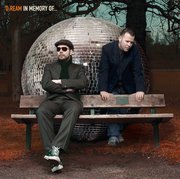 Reading on Twitter that we had been sent the track, but were unable to upload it due to its size, Al (@d_ream) offered to edit us a smaller version.

“Let me play around with it and see if I can bring it in under 2mb. I like a challenge” he tweeted.

So for all you synth-pop fans out there, here’s a chance to listen to an exclusive Ambler edit of D:Ream’s new single ‘Gods In The Making’. Just click on the link above.

The track features original keyboard player Brian Cox (now probably better known as physicist Professor Brian Cox from BBCs Wonders of the Universe series), and is taken from their new album ‘In Memory of…’

The band, DJ Alan Mackenzie and singer Peter Cunnah are touring the UK  beginning March 10, with the nearest gigs in Glasgow and York at the end of May.

D:Ream hit the headlines in the 90s with ‘Things Can Only Get Better’ and ‘U R The Best Thing’ and went on to have eight Top 40 singles, two platinum selling albums and a string of arena tours.