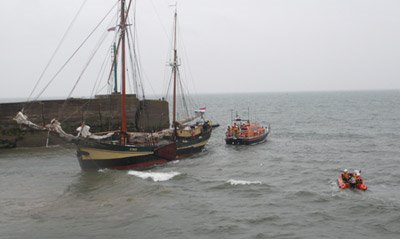 Both of Amble’s RNLI lifeboats were requested to launch on the evening of June 12th by HM Coastguard after the 100 year old Dutch Clipper De Tukker miscalculated the tide and grounded at the harbour entrance.

She had tried to enter the harbour at low tide and immediately came to rest on the sandbank at the harbour entrance.

The volunteer crewmembers were paged at 19.05 hrs and immediately launched the All-weather Lifeboat The Four Boys and the fast-response Inshore Lifeboat Mildred Holcroft to the scene.

Due to the considerable size of the vessel which created a significant obstacle and the rising SE wind which would create a swell, it was decided to tow De Tukker off the sandbank and out to deeper and safer water until the tide had risen and she could re-enter the harbour safely.

Mildred Holcroft was used to pass a tow rope across to De Tukker from The Four Boys and the extraction began.  All the while, the crews had to be mindful of how close she was to the north wall of the harbour in case she suddenly swung around on her anchor.

The Four Boys then used her considerable towing power to pull De Tukker around in an arc until she was correctly placed for a full power extraction from the sandbank. Once this was safely achieved and it was confirmed that there was no water ingress, she was guided out to deeper water to wait out the tide and advised not to re-attempt the harbour entrance until at least 21.30 hrs that evening.

RNLI Coxswain John Connell went on to say “This was a large and heavy vessel and we were conscious of the rising gale forecast from the south-east which would have made things difficult an hour or two later so the safest option was to take her out of potential danger. Our volunteer crewmembers used their experience, training and knowledge of local waters to ensure this was carried out safely and smoothly”.