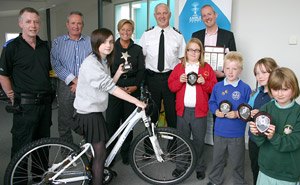 Five young model citizens were  awarded prizes and trophies to recognise their outstanding behaviour and attitude both in and out of school. Thirteen year old Amber Brown from James Calvert Spence College, South Avenue was selected as the overall winner.

Book tokens, swimming vouchers, free entry to local amenities and vouchers for a local restaurant were among the prizes, with the top prize being a mountain bike. Local businesses had all donated the prizes. The five children had been selected by their schools.

Inspector Sue Peart began by saying that she was pleased that the ceremony had turned into an annual event as the good kids of Amble deserved to be rewarded for their hard-work and behaviour. She also praised CSO Fawcett and said how proud she was of him for setting up the event.

Next, CSO Fawcett explained why each child had been nominated for the award. 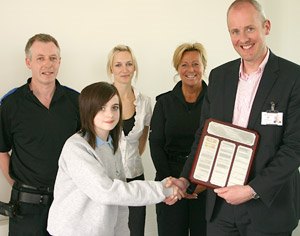 Each young citizen was presented with an award and a goodie bag. The overall winner was given a bicycle donated by Nick Spurr of Spurreli’s.

Amber Brown was selected as the overall winner and was presented with the bike by Chief Inspector Mick Todd, Inspector Peart and CSO Darin Fawcett.

Amber said ‘It was really good to be nominated and I’m excited and pleased to have won the prizes. I especially love the bike.’

In recognition that this was now an annual event, Nickalls Accountants had donated a plaque displaying the names of this year’s and last year’s overall winner.

Richard said “It’s an honour to recieve [the plaque] as it’s a recongnition for the school and the police as a positive outcome of working together. Amber is a deserved winner as she does a lot for the school and the community. She is always coming up with fantastic and creative ideas including organising and leading a talent show which raised £100 within the first hour.” 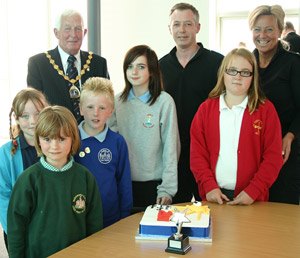 CSO Fawcett and Inspector Peart also gave a huge thanks to all of the sponsors who kindly donated prizes for the ceremony.

If anyone would like to contribute to next year’s Good Young Citizens Award, please contact CSO Darin Fawcett on darin.fawcett.4089@northumbria.pnn.police.uk

This article has been updated. On 27 June more detail was added into the reasons why each young person was nominated.