Nine year old Aris Arrabal Byrne received a near fatal snake bite while on a camping holiday in the Scottish Borders.

Aris who lives in Amble, was camping with his family by a stream in Kielder Water in a place called Death Valley. He told The Ambler about his experience.

“I was with my friend and we went off to get firewood. It was about 11am and we went over the stream and climbed a hill. Then my friend shouted ‘Snake!’ and we saw it sunbathing in the open. My friend said ‘Pick it up!’ so I grabbed it by the tail first and it went for me. So then I tried to pick it up nearer its neck, and the second time it got me on the ring finger.”

Aris described how he shouted to his Dad at the camp below and then how his finger started to ache. By the time they got down to the camp, he was starting to feel sleepy and beginning to vomit. His Dad was worried and started the car. There was no mobile phone signal at their camp site so they went to the shop in Kielder to phone the emergency services. At that time both the rescue helicopters were out on calls. They were instructed to drive towards Hexham and an ambulance was despatched; they met up at Bellingham. 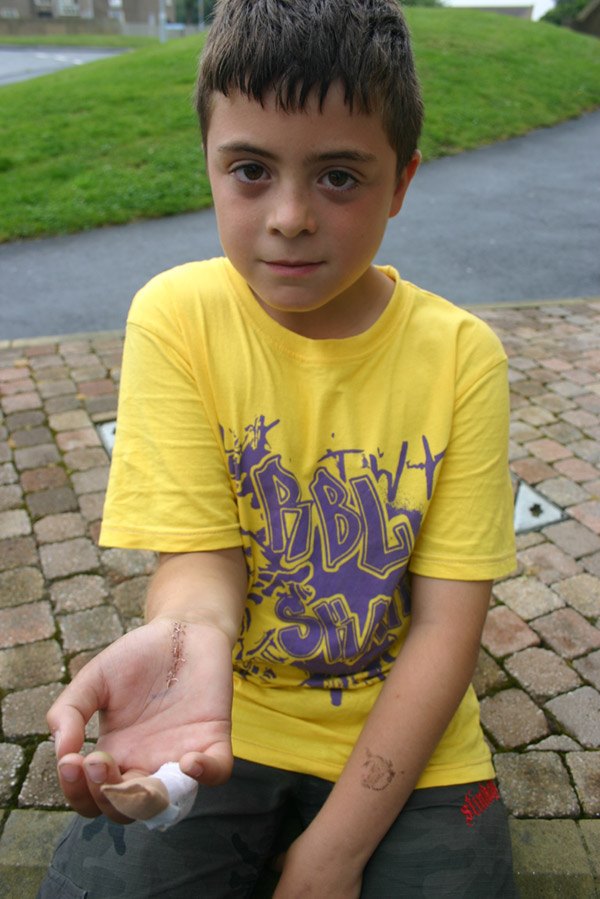 Once in the ambulance, Aris received antibiotics and painkillers through an IV drip which was repeated when they reached the RVI in Newcastle. He kept falling in and out of consciousness and when Stella his mother arrived at the hospital at teatime, she described how Aris’ arm had been put in a sling to keep the swelling down.

“Aris was awake then but not himself” she said. “Fortunately the venom hadn’t gone past his wrist, but over the next few hours his wrist and hand kept swelling.

“By 7pm when the plastic surgeon came down the doctors decided they had to release the swelling. You could see the track of the venom had moved up his arm. They had to do blood tests to see which anti venom to use. And then they brought down loads of equipment. Aris was in and out of sleep all the time. The anti venom took half an hour to drip through. Luckily he didn’t get any more side effects from the anti venom, apart from a red and swollen face.”

After six days in hospital, Aris is now recovering well, although he bears the scars of the incisions which were made to reduce the pressure and save the function of his hand. Doctors applied honey to the site of the open wound where the adder had bitten, and this said Stella worked a treat in drying up the area.

Aris said “If I wasn’t treated, I would have died.”

Learning from his experience, he had words of advice for other young adventurers; “Next time I won’t pick the snakes up. It’s their home, so we should leave them alone.”

Aris and his family would like to thank all the ambulance crew and the hospital staff at the RVI for their kindness and treatment during his ordeal.